African horse sickness (AHS) is endemic to the African continent and has, for many years, led to a ban on exports of live horses to uninfected countries. The disease affects all breeds of horses, mules and donkeys and has a very high mortality rate. The virus that causes the disease is transmitted to horses by tiny blood-feeding midges of the genus Culicoides. The type of midge most common in Gauteng is Culicoides imicola, while Culicoides bolitinos is more abundant in areas with cooler climates, such as parts of the Free State and KwaZulu-Natal. Research done in the Department of Zoology and Entomology at the University of Pretoria (UP), in collaboration with the Agricultural Research Council (ARC) and Onderstepoort Veterinary Institute, found that the abundant occurrence of these two species of midges in the respective areas is at least partly due to their different abilities to withstand cold temperatures.

In 1997, an AHS-controlled area that included a small free zone was established in the Western Cape to enable horse exports to the European Union (EU). However, this trade was disrupted several times owing to outbreaks of AHS in the controlled area (although never in the free zone). As AHS is seasonally endemic in South Africa – meaning that it occurs mostly in the warm, rainy season when midges are plentiful, and disappears after the first frost, when the midges die – it stands to reason that temperature could be a factor in the life cycle of the organisms that transmit the virus from one infected animal to another. Arné Verhoef, a postgraduate student at UP, conducted research on the influence of temperature on the vectors of the AHS virus, in this case the two species of midges C. imicola and C. bolitinos. The study was conducted under the guidance of Dr Gert Venter, an extraordinary lecturer in the Department of Veterinary Tropical Diseases, and Dr Chris Weldon, a lecturer in the Department of Zoology and Entomology at UP. The findings of the study were published in the open-access journal Parasites and Vectors.

In the journal article, the researchers reported that under cold conditions adult C. imicola lost their ability to move and experienced high levels of mortality. In C. bolitinos the same results were obtained, but the temperatures required to achieve them were much lower than in the case of C. imicola. It was found that, remarkably, some adult C. bolitinos were able to survive at temperatures as low as −6 °C, whereas the same temperature led to complete mortality in C. imicola. The tolerance of the two species under hot conditions was found to be quite similar.

Further research is required on the environmental variables that influence the abundance of AHS virus vectors, but the results obtained suggest that the distribution and abundance of C. imicola is likely constrained by their relatively poor tolerance of lower temperatures. Results for C. bolitinos suggest that they are more resistant to extreme changes in temperature, which gave rise to the hypothesis that the thermal biology of other stages in their life cycle could determine their range. The improved knowledge of the influence of temperature on the life cycle of these midges could assist in the creation of more realistic risk maps for AHS in South Africa and could help to shed light on the effect of climate change on the presence and expansion of this and other viral diseases.

Click here to read the full article as published in the journal Parasites and Vectors. 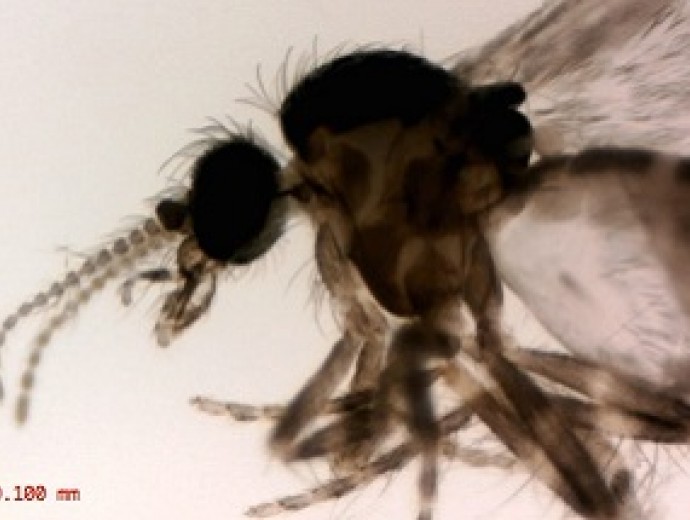