The Dean of the Faculty of Education, Prof Irma Eloff, received an international excellence in research award on 22 July 2014 in Melbourne, Australia, on behalf of the team of UP-Yale researchers led by the Dean and Dr Brian Forsyth from Yale University.

The Prize for Excellence in HIV Research Related to Children (formerly known as the Prize for Excellence in Research Related to the Needs of Children Affected by AIDS) is awarded once every two years and is jointly offered by the International AIDS Society (IAS) and the Coalition on Children Affected by AIDS (CCBA). The prize is awarded to an investigator whose abstract on research work done demonstrates excellence in research that is likely to lead to improved servicesfor children affected by HIV and AIDS.

According to a statement made at the 20th International AIDS Conference in 2014, there is an urgent need to advance the scientific understanding of paediatric HIV and the psychosocial impact of the epidemic on children to enhance practices of prevention, treatment and care. With the aim of drawing the attention of the scientific community to children infected and affected by HIV and AIDS, the IAS/CCABA Prize for Excellence in Research Related to the Needs of Children Affected by AIDS was first awarded in 2010 at the 18th International AIDS Conference in Vienna.

The research team’s winning abstract reported on a randomised clinical trial of an intervention to promote resilience in young children of HIV positive mothers in South Africa. The research project, known as the Kgolo Mmogo project (Kgolo Mmogo meaning ‘building together’) was conducted in South Africa and was designed to assess the efficacy of interventions to promote resilience in young children of schoolgoing age, who live with their HIV positive mothers. Researchers from the University of Pretoria and Yale University collaborated on the project that was funded by the US National Institute of Mental Health.

The conceptual framework used in the intervention was based on the understanding that the psychological trauma experienced by mothers dealing with HIV compromised their parenting and contributed to their children’s behavioural difficulties and poor functioning. The framework was further developed through action research, using focus groups with HIV positive mothers. The final intervention comprised 24 weekly group sessions. During the first 14 sessions, mothers and children were placed in separate groups and addressed their own challenges, and in the last 10 sessions these groups got together to focus on parent-child communication and parenting.

In the end, 390 mothers and their children were randomly selected to receive either the intervention or standard care, and followup evaluations were conducted regularly and continued for 12 months after the end of the intervention. The results of the study demonstrated significant improvements in child behaviour and functioning in the areas of communication and daily living skills regarding those who participated in the intervention, and these findings continued over the follow-up period of 12 months.

This was the first study demonstrating benefits of an intervention designed to promote resilience among young children of HIV positive mothers. The intervention was specifically designed for an African context. It was carried out by communitycareworkers, using a manual indicating specific objectives and activities for each session. It is hoped that with wider implementation, the Kgolo Mmogo intervention could benefit large numbers of vulnerable children.

Results from the study were recently published by the USA National Institute of Health at http://www.ncbi.nlm.nih.gov/pubmed/24991908 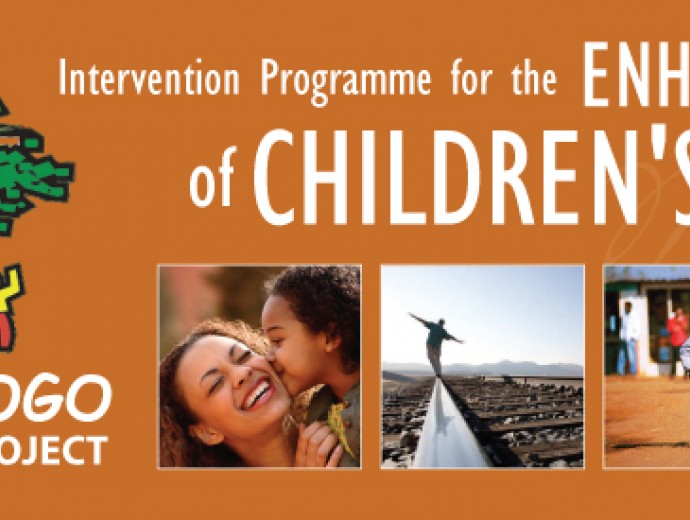