The man is utterly focussed on keeping the woman standing on one foot in the palm of his hand in the air high above his head. One second passes, then another the whole exercise lasts about eight seconds.
This was not a scene during some strongman competition. It was the TuksCheerleading squad earnestly in training for an upcoming competition. Vandre Prinsloo and Chuma Msindo were busy practising the Cupie-move. He is the base, and she is the flyer. For the eight or so seconds the move lasts, it is all about trust.
For Msindo even more so because she has a fear of heights. Being so high in the air, balancing herself on the hand of somebody else is really a case of mind over matter. However, she would have it no other way. One of the things that attracted her to cheerleading was the adrenaline. Those few seconds of feeling totally fearless.
By the way, Tuks managed to finish second overall in Tertiary Small Co-ed section over the past weekend when competing at the Gauteng Majorette and Cheerleading Association provincial competition. Earlier this year they won a competition in Boksburg.
Believe it or not, but cheerleading is considered to be a real sport. In 2016 it was officially recognised by the International Olympic Committee (IOC) and had been granted provisional Olympic status. Last year Kit McConnell (IOC sports director) said that the International Cheer Union is now eligible to apply to become part of the Olympics program. That doesn't necessarily mean that cheerleaders will be going to the 2024 Games, but at least they are getting closer to doing so.
Rindie Prinsloo (Tuks head coach) explained that at a typical cheerleading competition, teams perform a two and a half minute routine with music that includes stunts, pyramids, tosses and tumbling.
"Teams are judged by a panel of cheerleading experts on difficulty and execution. Some of the stunts a team might perform are the tick-tock, liberty, show-n-go, bow & arrows, and so much more. In all of it, precision is of the utmost importance. One leg of a flyer not being straight at a crucial moment can mean the difference between winning and losing."
Seeing someone holding a woman up in the air with only one hand seems like a real show of strength. It is easy to conclude it takes spending hours and hours in a gym playing around with heavy weights.
Vandre Prinsloo is however quick to point out that physical strength is not a prerogative to be a base in a cheerleading team. Bases are the athletes that hold the flyer or top girl in the air during the stunt.
"Look at me. I am one of the smallest guys in our team, and I can do everything and more than the bigger guys do. Also, we have fantastic female bases. Being a base is 70% technique and 30% strength."
Flyers are usually, but not always, the smallest people on a cheerleading squad. Msindo weighs only 49kg but laughs when asked if she purposely starves herself before a competition to make it easier for the bases.
"People will be surprised by how much I actually eat."
- Author Wilhelm de Swardt
Published by Martha Kilian 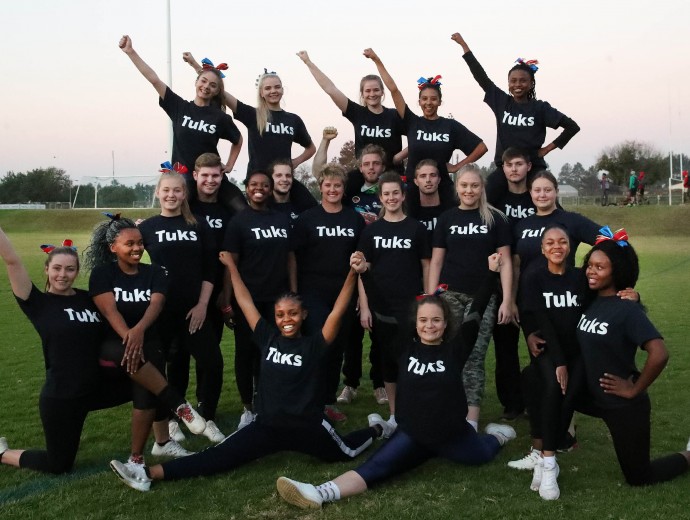