#TuksCanoe: Rebecca Rogers and Jethro Brophy are actively trying to get the TuksCanoe Club going again

It has been quite a while, but Tuks athletes have taken up the oars again with the aim of taming South Africa's rivers. The recent three-day Dusi Canoe Marathon was their first conquest.

Three Tuks canoeists competed in what is generally believed to be one of the toughest challenges on the local endurance calendar. There are never any guarantees. Boats can break, canoeists get mauled in rapids. Ankles are sprained or broken. In the past, there even had been stories about canoeists getting acquainted with the wildlife-black mambas.

Only Rebecca Rogers knew what she had let herself in for. When she was in matric, her dad convinced her to row with him. Last year, she convinced Jethro Brophy to switch boats. He used to be an avid sailor but once "shot" his first rapid, he was a converted canoeist.

For Johann Jansen van Vuuren it was a case of joining the "enemy". When he was still at school, one of the biggest thrills was to confuse canoeists. The ultimate would be if a boat capsized.

"Our farm borders the Upper Umgeni River. My father used to get irritated seeing canoeists crossing our farm either, running or rowing. To him, it felt like they were trespassing. He often encouraged us to stand at the rapids and point the canoeists in the wrong direction. Once they took the wrong line, things often went awry very quickly. Seeing them taking a swim was funny."

Jansen van Vuuren took up canoeing in order to stay fit. It did not take long for the Tuks canoeist to realise he actually enjoys being on the water rowing. One thing led to another. He entered a race and got hooked. It meant he needed someone to second him.  "Dad", volunteered.  The irony of it is that his dad is now one of the biggest fans of canoeing.

Rogers and Brophy thoroughly enjoyed their Dusi adventure. Their most significant achievement was having a "clean day" for the first time. It meant going unscathed through every rapid.

The one thing Rogers hated was the running carrying their boat. To make things worse was that she lost a shoe during one of the stages. So she had to hobble along.

Jansen van Vuuren and his teammate, Josh Thring, did not mind running.

"We were possible two of the worst paddlers to enter the Dusi. When rowing, we got passed by 'ancient' competitors. Even young girls were faster than us. Running with the boat allowed us to make up some lost time."

If nothing unforeseen happens, the three Tuks students hope to do the Dusi again next year. They vow to be fitter, stronger and more experienced. If they had their way, they would not be the only Tuks competing.

Rogers and Brophy are actively trying to get the TuksCanoe Club going again.

"We are literally starting from scratch. Once things are back to normal, we hope to have night races at the dam near the Tuks Sports Centre. We also came to an agreement with the Centurion Canoe Club. It will enable us to go row with them on the Rietvlei Dam and compete in their races," Rogers explained.

According to Brophy, one of their biggest frustrations is finding equipment.

"For now, we are searching garages in the hope of maybe finding a spare boat or even an oar." 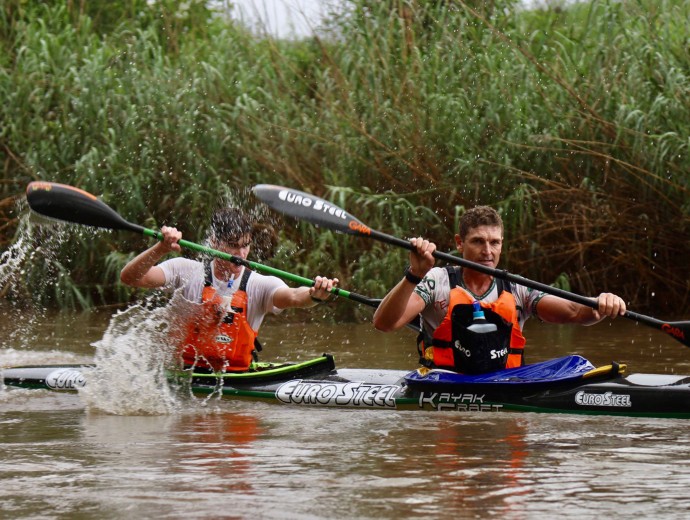