Last year Kayla de Beer (Tuks) kayaking skills could be described as fast but fading, but through hard work, everything changed that is why she was able to win a K1-race at a SA Sprint Cup event for the first time.
She was victorious over 200 metres during the second Sprint Cup in East London. To say that she was chuffed would be an understatement. She was ecstatic.
"I have never been able to beat the likes of Bridgitte Hartley (former Olympic bronze medallist), Esti van Tonder and Donna Watson. I am quite a fast starter; however, in the past, I tended to fade over the latter stages of the race. This time around I managed to keep my top end speed right to the end. It was exhilarating."
By winning De Beer ensured that she would be competing at the World Under-23 Championships as well as the two World Cups in Poland and Germany.
There is a lot at stake. One excellent performance could mean that she stakes a claim to represent South Africa at the 2020 Olympic Games in Tokyo.
"Qualifying for the Olympics is going to be tough. I think only a top-five finish in an A-final will cut it," explained Tuks kayaker.
Not that De Beer is a stranger to competing in international A-finals. Last year she and Van Tonder finished 7th in the K2-final over 200m during the World Cup in Szeged, Hungary. They went one better during the Duisburg World Cup in Germany finishing 6th in the A-final.
Unfortunately, they won't resume their "partnership" at least for this year as it is believed that the South African kayakers have a better chance of qualifying for the Games in K1-boats.
"One of the problems we face in South Africa as that we don't always have a qualified coach to assist us with our technique. In a K2-combination it is of cardinal importance that you and your partner are absolutely in sync.
"We were lucky that quite a few international teams came out train at Roodeplaatdam. Their coaches helped us quite a lot for which we are grateful."
It was Hartley that got De Beer to take up kayaking.
After winning a bronze medallist over 500m at the 2012 Olympic Games in London, Bridgitte Hartley was concerned about how few female sprint kayakers there were in South Africa, so she took it upon herself to canvass for new talent at schools in and around Pietermaritzburg.
De Beer was at the time playing provincial hockey as well as being an avid water polo player, but Hartley’s passion for sprint canoeing got her interested in trying something new.
“I was the only one of my school who decided to attend Bridgitte’s sprint canoeing clinic. Off the bat, I was good at it. Six months later I represented South Africa at the African Championships. The next year I was selected for the World Junior Championships.”
- Author Wilhelm de Swardt
Published by Leonore Jordaan 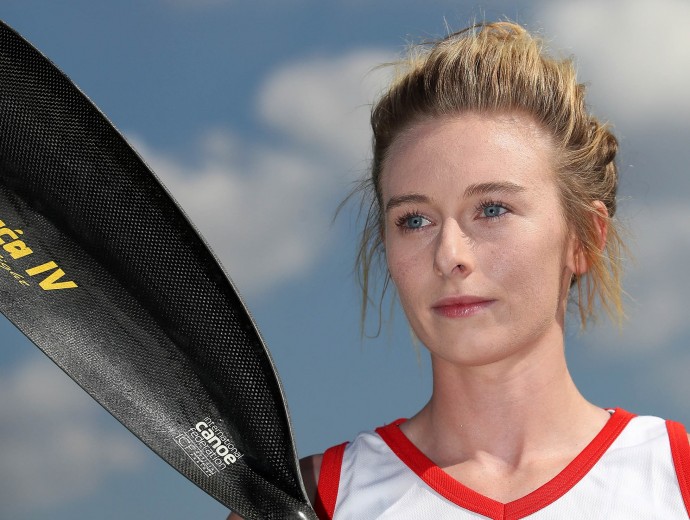