When Kayla de Beer (Tuks)  and Esti van Tonder line up to race over 200m at the start of the Word Sprint Canoeing Championships in Montemor Velho in Portugal it will be only the sixth time ever that they will be rowing together as K2-crew in a kayak.
But then numbers don’t always tell the real story. In spite of their inexperience, their racing CV is actually quite impressive. They first raced together during the South African Championships winning gold. Their second race was at the World Cup in Szeged, Hungary where they finished 7th in the A-final. They went on better during the Duisburg World Cup in Germany finishing 6th in the A-final.
It is interesting to note that in Duisburg they managed to beat the Swedish crew in the heats. The Swedes then had to race the semi-finals to qualify for the A-final and went on to win the bronze medal in the final.
De Beer said their Duisburg performance proves that if they are able to keep their cool and row the perfect race, they should have a realistic chance to qualify for the A-final.
If they do so it would be quite an achievement as Bridgitte Hartley (Tuks) is the only South African female kayaker who ever qualified for an A-final at the World Championships.  During the 2009 Dartmouth World Championships, she won bronze in the K1-race over 1000m and another bronze in the K1-race over 500m during the 2014 World Championships in Moscow.
De Beer ascribed their success to the fact that she and Van Tonder just clicked from the first moment when they got into the boat.
According to Van Tonder, it was a mere case of just getting on to do what they set out to do.
“I think what helped is that we trained together in the K1-boats so often. It led to us learning each other’s ways before we got into the K2-boat.”
De Beer thinks honesty also plays a big part in their partnership.
“Because we understand each other so well it easy to say straight out when something is bothering you. When we get off the water, it is over and done with. The nice thing is that we both know that our next session is going to be better.”
Van Tonder added that they are two entirely different kayakers which are why they gel so well in the boat.
"Kayla has a lightning fast start while I tend to be sluggish at first, but I am like a diesel engine. Once I reach my top end speed, I can keep going forever.”
Unfortunately, the K2-race over 200m is not an Olympic event. So the question is will they start racing over 500m?
De Beer is honest with her answer.
“It is going to be a challenge as I tend to fade quite badly over the second half of a 500m-race.”
However, Van Tonder is of the opinion that it is all just a mind thing for her Tuks teammate.
“Kayla is doing exactly the same physical conditioning as I do and our training program on the water is to be competitive over 500m. So as far as I am concerned she can be competitive over the longer distance, it is just a case of believing.”
Van Tonder will also compete in the K1-races over 200m and 500m at the World Championships (23-26 August). She hopes to qualify for at least one A-final.
- Author Wilhelm de Swardt
Published by Leonore Jordaan 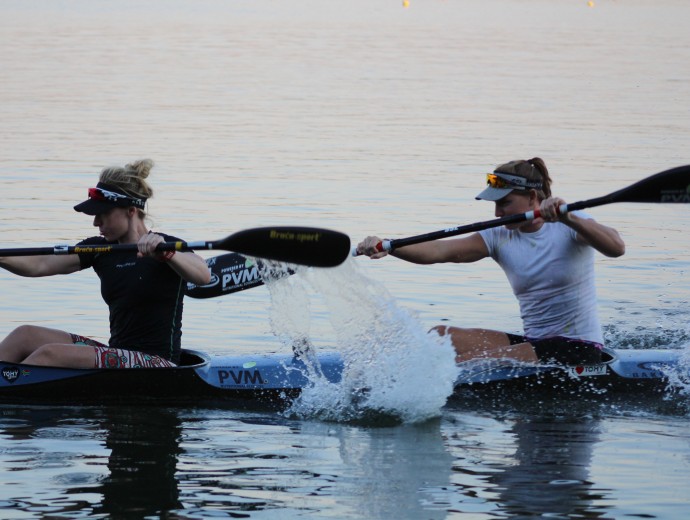