Graham Paull made South African sports history last year when he became the very first para-canoeist from the African continent to represent his country at the Paralympic Games.

By doing so he proved that there are no boundaries in sport as long as you are prepared to put in the work. Paull's dedication inspired 19-year-old Jonathan Wing (TuksCanoeing), to follow in his footsteps and compete in the 2020 Games. He believes it will be his big year.

Wing lost his foot when he was six years old. He fell off the back of a small tractor lawnmower it reversed over his leg. The doctor advised his parents that Wing's quality of life would be better if his foot were amputated. There is not a moment that Wing regrets the decision as he is too busy living his life to the fullest.

Before he became a dedicated canoeist, he raced go-karts. He stopped a few years ago because the mental aspect of the sport was taking its toll on him.

'In go-kart racing, everything happens at high speed, which means that you always have to be alert. Otherwise, there is a good chance you will crash,' he says.

The big turnaround in Wing's sporting career happened when he was in Grade 8 at Hilton College. A friend convinced him to try sprint canoeing. He enjoyed it from the very first stroke.

After he participated in the South African Schools Sprint Championship, his coach at the time hinted that Wing might have what it takes to compete at the Paralympic Games. That cemented his decision to become a serious canoeist.

Wing is quite realistic about his 'road to Tokyo'.

'I am not yet strong enough to compete against the best. In para-canoeing, you don't get to compete in a junior category and then go on to the senior category. There is just one category and one distance. Our Olympic distance is 200 metres, and as a youngster, you compete against canoeists who are ten years older than you and physically much stronger. This means I still have to bulk up in the gym and put in the long, hard hours on the water. I think once I turn 23 I will be ready to race the best. That will be in 2020.'

The University of Pretoria second-year Mechanical Engineering student represented South Africa at the Para World Championships in both Moscow and Milan. He is quite pleased with his performance in Milan as he qualified for the C-final at the age of 17.

When asked how rowing with one artificial limb affects him as a canoeist, Wing said: 'It is a disadvantage because canoeing is not just about upper body strength. A lot of power comes from the hips so you have to kick with your legs while rowing, with a kick-and-pull action. When you are in the canoe your feet are strapped into pedals, sort of like a cyclist.'

According to Wing, there is nothing more relaxing than being out on the water rowing after a long day of attending classes.

'Canoeing helps me calm down even though we are really going at it on the water. It is just special to be out in nature, pushing yourself to the limit,' he says. 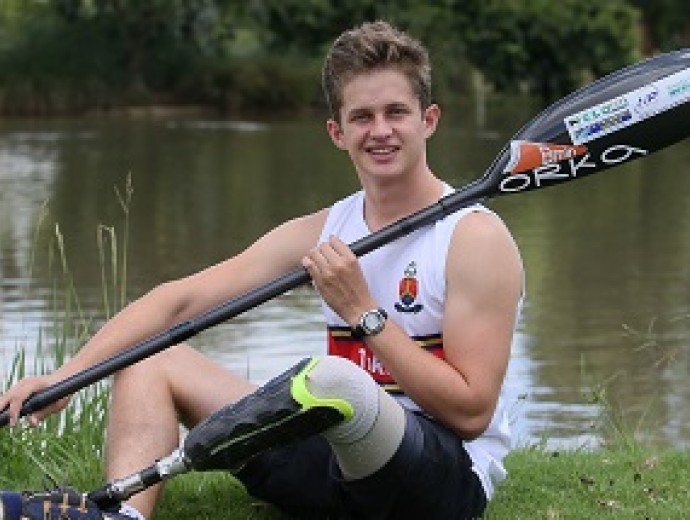