Contesting the Varsity Tournament playoffs are what the Tuks men's basketball team has set their sights on from Friday when playing at Wits.

Louis Motaung, who is one of the old hand in the team, admits to being able to do so means everyone will need to be at their best for every minute of every game.

"Playing the Varsity Tournament is tough. There is not really such a thing as an easy game. On Friday, we are up against VUT. They are one of the top teams in university basketball. Next, we will be playing our nemesis Wits and then UKZN who have beaten us in the previous two occasions."

Motaung is confident that it won't happen again. His confidence sprouts from a recent league encounter against UJ who won the USSA Tournament earlier this year.

"We were dominating on the court as well as the scoreboard for most of the game. UJ did win in the end. What made it exciting is that we were able to make a game of it. Normally UJ thrashes us by 20 or more goals. This shows to me we are ready to take our game to the next level."

Motaung sees himself as the team's fixer playing as small forward.

"I got enough height and the ability to play inside as well as agility to play on the outside. Small forwards are usually the second or third best shooters on the team and should be able to do a little bit of everything on the court. That is why I like to think of myself as the fixer."

Liam Hayward is the big bloke on the team and will be making his Varsity debut playing centre.

"The centre is usually the team's tallest. I am required to be physically domineering with more physical strength and athleticism. We get to score from offensive rebounds and are also required to block defenders to open other players up for driving to the basket. On the defence, the centre is responsible for keeping the opponent from shooting by blocking shots and passes in the vital area," is how the 2.03m tall
Hayward describes his role.

On being asked whether "white men can jump" Hayward laughed before answering yes.

"You should see our captain, Ludwig Gerdes, jump. He can fly." 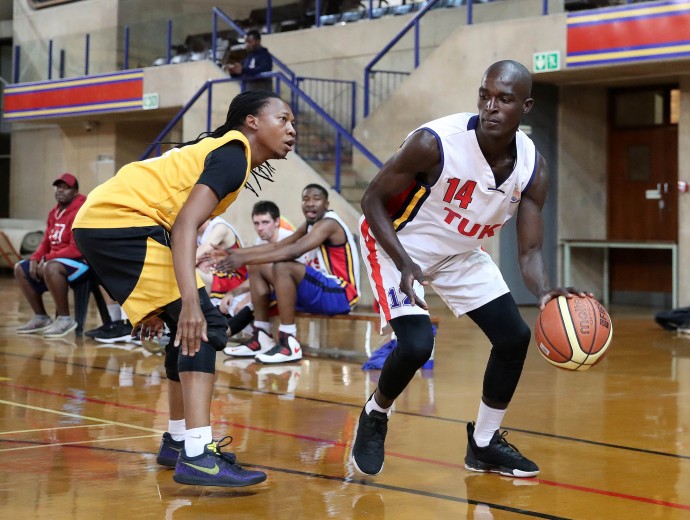