#TuksBasketball: Basketball is a means for Tuks coach to change players lives for the better

2019 might just be the year that the TuksBasketball teams start giving a better account of themselves during local tournaments.
Over the past few years, both the men’s and women’s teams had their moments of brilliance but the times it happened was, unfortunately, few and far between.
The women’s head coach, Danny Malothane, is not apologising for what happened. As he views, especially last year, as a building phase with the view to get the results he wants.
“The focus was on getting our second stringers to play better. In doing so, we created a bigger pool of players from which I now can select the first team. It is exciting that about 90% of last year’s first and second team players are still available for selection. Now we just need to recruit one or two more talented players. Then I am sure we shall start being competitive.”
Malothane is genuinely passionate about what he does. According to him if it was not basketball, he might have self-destructed growing up in Polokwane.
“I grew up in a crime-stricken area. There used to be always some temptation to do something unlawfully. If it was not for playing sports who knows how my life might have turned out. Luckily I got the opportunity to play basketball and softball which allowed me to channelise my energy positively. I can say that basketball saved my life and gave me self-respect,” said Malothane who represented Limpopo in basketball as well as softball.
For the last 22 years, he has been coaching various teams also at a national level where he has mainly been involved with the juniors. He sees his role as a coach as payback for the opportunities he got through his involvement in basketball.
“It is never just about winning. There is no greater award than changing one player’s life for the better. Getting my players to trust me is of the utmost importance. I see my role as sort of a father figure. If any player has a problem, I am always available to listen, and if I can help in any way, I will go out of my way to do so.”
The Tuks women’s team will compete in three tournaments. The first will be in April at Wits. In July Tuks will be hosting an invitational tournament as part of their preparation for the USSA Tournament.
Malothane is not one to make bold predictions, but he hopes that his team will get to contest the semi-finals during the USSA Tournament. They did so in 2017.
The Tuks men’s team has got a whole new coaching setup. Neo Mothiba stepped down as head coach due to work commitments. George Makena who can genuinely claim to have been there done that in South African Basketball is the new coach. He will be assisted by Thanda Kweyama who coached the second stringers last year.
Next week there will be trials for the men’s teams. For more information, Makena can be contacted at [email protected] or Kweyama at [email protected].
Note:
George Makena (Tuks first team head coach) was absent during the photo session.
.
- Author Wilhelm de Swardt
Share this page
Published by Leonore Jordaan 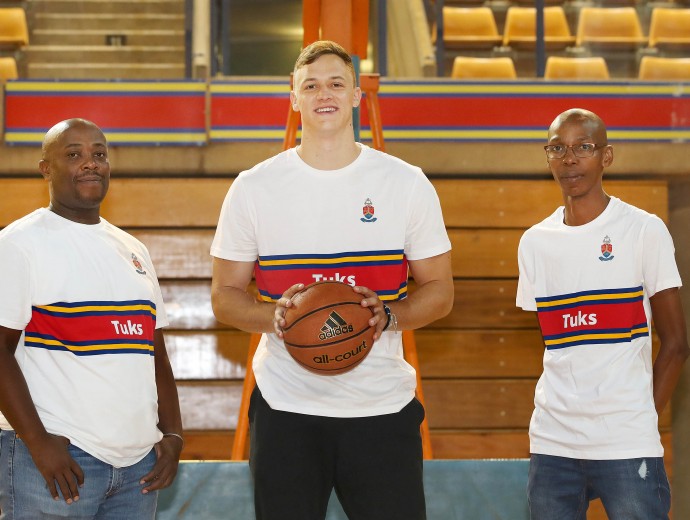