The 20-year-old, Bridget Theunissen of TuksTriathlon, is starting to make a habit of finishing every tournament on the podium. On Sunday, 13 February, she was second winning a silver medal with a time of 1:08:34 in the elite women’s category at the 2022 Africa Triathlon Cup - Maselspoort in the Free State.

Her worst result since June last year was finishing fifth during the African Triathlon Cup and Pan Arab Championships in Sharm El Sheikh, Egypt. Theunissen won silver in the women's under-23 race at the African Champs a week later. In the same tournament, she also won bronze in the team relay. Then in September, she finished second in the African Cup in Troutbeck.

The Tuks triathlete is the first to admit that she will have to improve in order to have a realistic chance of representing South Africa at the Birmingham 2022 Commonwealth Games.

"I especially will need to work on my run coming off the bike. Yesterday I was "broken" when we started the 5km run. The heat certainly did not make things any easier, but I can't use that as an excuse."

According to Theunissen, her swim was not too bad. She was about 11 seconds off the pace when she got on her bicycle.

"I managed to catch up just after the first hill. I literally 'killed' myself to do so as it was a make or break moment. Shanae Williams, who has got quite a bit of international experience, purposely made sure that we kept on racing at a high pace. I am glad we did, but it took its toll on my body.

Being the forever student of triathlon, Theunissen spoke to various other coaches afterwards for ideas as to what to do to improve her running performance.

"It is not as if I am a lousy runner. When I train on the track, I am able to regularly clock fast times. I need to find a way to do the same when I race. The advice I got yesterday was to do a high-intensity cycle in training, and then immediately afterwards push myself to my limits on a run. The idea is to condition my body to perform under pressure.

"I think racing internationally will also help me to become stronger. The plan is to compete in Europe from June to July. It will definitely help me to become a better swimmer as well. In international racing, you often compete against 30 or more athletes. It means the start of the swim is often chaotic-sort of a fight for survival.

"The cycle leg has also become more challenging. Flora Duffy who won the gold medal during last year's Tokyo Olympic Games changed everyone's approach. She is a firm believer in racing flat out never giving anyone any respite. If you can't keep up it is raced over."

The Tuks triathlete is relieved that the Commonwealth Games is a sprint event (750m swim, 20km cycle, 5km run).

"I have purposely been very selective when it comes to race the Olympic distance events (1.5km swim, 40km cycle and 10km run). It is because I am still young. It would be foolish to race too hard too often. That is when you pick up injuries." 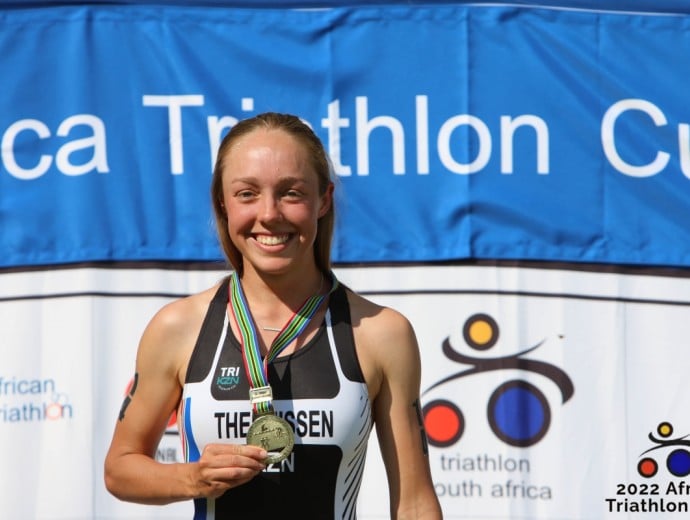