Sullwald wins African under-23 title for the third time

Henri Schoeman proved to be a real class act when he won the African Triathlon title in East London for the second successive year on the 20th March 2016. Schoeman led from start to finish, winning the 1.5km swim, 40km cycle and 10km run in 2 hours and 48 seconds.

Wian Sullwald (Tuks/hpc), who finished second overall with a time of 2:04:05, won the African under-23 title for the third time. His teammate, Basson Engelbrecht (Tuks/hpc), was third overall in 2:05:27 and the second under-23 athlete to finish.

Sullwald had reason to be happy with his performance. It was the first time in nine weeks that he was able to compete and he admitted that he was nervous and unsure of himself when he started his race.

“Naturally I was hoping for a top-three finish but I was not sure how my knee would hold up. I won’t say it was 100%. The big positive I can take from the race is that I was able to finish the 10km run without being in serious pain. However, I have to admit that Sunday’s run was certainly one of the hardest I have ever raced. The fact that I was only able to start running again last week definitely caught up with me. Over the last 5 kilometres, I struggled with each leap that I took.

“The important thing is that I gained valuable international ranking points which should enhance my chance to qualify for the Olympic Games in Rio.”

Schoeman had a lead of nearly 60 seconds after the 1.5km swim.

The two Tuks/hpc athletes formed an alliance during the 40km cycle in which they managed to open a small gap between themselves and Mehdi Essadiq (Morocco). Going on the 10km run it quickly became clear that Sullwald was the stronger runner.

Sullwald said that once he realized that he was not going to catch up with Schoeman and that Engelbrecht was not going to gain time on him, he went into survival mode and merely focussed on finishing the 10 kilometres.

Engelbrecht said afterwards that he was unhappy with the way his race played out.

“I really battled on the run and I am not sure why. I will have to sit down with my coach, Lindsey Parry, to try and find out what went wrong. The positive for me is that I had a relatively good swim as well as a strong cycle.”

Engelbrecht concluded that patience is a virtue and that he is confident that it is only a matter of time before he will be able to put together the near-perfect race. 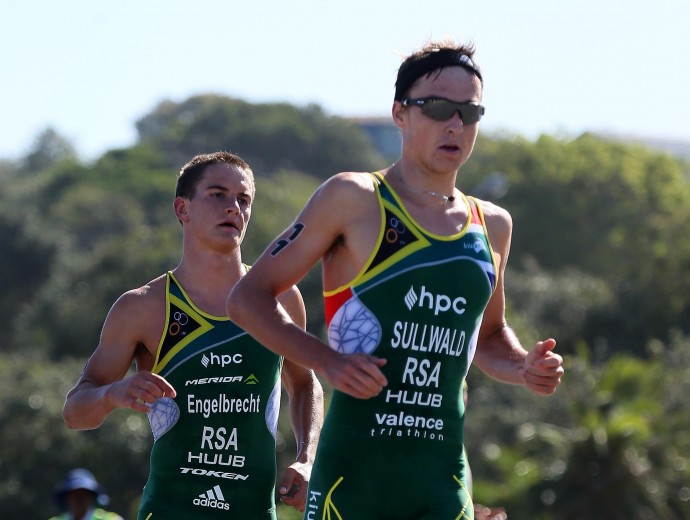