Rhino poaching in two of South Africa’s most famous game reserves is starting to have an impact on tourism and could affect future visitor numbers if the situation does not improve, according to a new study by the University of Pretoria.
Prof Berendien Lubbe, head of the university’s tourism management department, said while the precise impacts on tourism numbers remained largely unmeasured, a recent survey of local and foreign tourists showed evidence that rhino poaching was a matter of increasing concern to many visitors.
While most foreign visitors still felt safe and were quite happy to have their vehicles searched as they entered or left a park, some domestic visitors expressed irritation about having to wait in queues to be searched at the gates.
Speaking at a conservation symposium near Howick on Wednesday, Lubbe said a large section of visitors was concerned and “suspicious” about the lack of information about rhino poaching when visiting parks.
Lubbe said a surprising result was that almost 70 percent of visitors surveyed indicated that the sound of anti-poaching helicopter patrols ruined the experience of visiting a game reserve to reconnect with nature and that this could deter them from coming back.
The survey involved 173 visitors to the Kruger National Park and the Hilltop and Mpila camps in Hluhluwe-Imfolozi Park in KwaZulu-Natal. Just over 40 percent were foreign visitors and the remainder domestic visitors.
She said an estimated 56 million visitors came to Africa in 2013 mainly to see wildlife, bringing in income of about $34-billion.
South Africa and Kenya were the top destinations for wildlife watching. She said wildlife remained by far the main attraction for tourists visiting South Africa.
The objective of the University of Pretoria study was to understand tourists’ perceptions towards rhino poaching, the importance of rhino in influencing their decision to visit a game reserve and whether poaching influenced their experience.
She said that while it was easy to measure the number of visitors, it was much more difficult to measure the economic impact of rhino poaching on tourist numbers.
While seeing rhinos was an important factor, but not the primary motivation for visiting parks, more than 60 percent of the respondents said they were regular visitors to wildlife reserves and 77 percent felt that not enough was being done to halt rhino poaching.
More than 30 percent said they had direct or indirect experience of rhino poaching, either from seeing dead rhinos, hearing gun shots or seeing and hearing anti-poaching helicopters on patrol.
Rhino poaching was emerging as an issue of increasing concern, with most visitors anxious that the situation was not under control.
“Most hold government to be accountable for anti-poaching measures, yet SANParks and Ezemvelo KZN Wildlife are still held in high regard by most tourists,” she said.
This article was originally published on IOL. Read the original article.
- Author Tony Carnie
Published by Liesl Oosthuizen 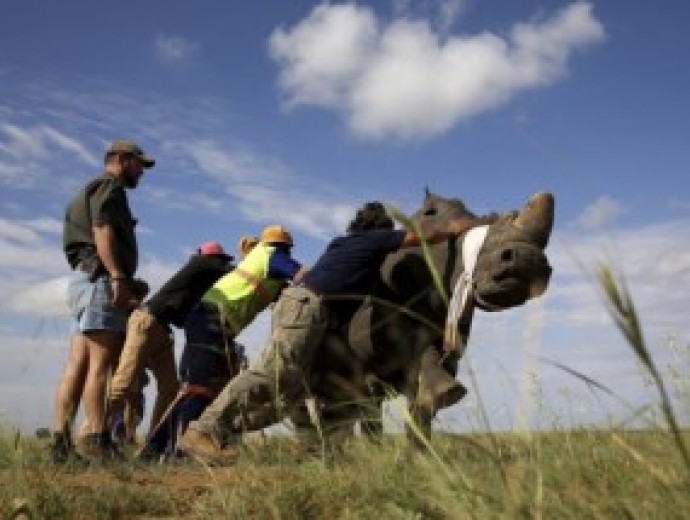 Workers attempt to bring a tranquillised rhino to the ground before dehorning in an effort to deter the poaching of one of the world's endangered species, at a farm outside Klerksdorp.