#TuksTennis: Donald Ramphadi to make “history” at the 2022 Australian Open

He is only the third  South African player to contest a Grand Slam Tournament. Lucas Sithole was the first and Kgothatso Montjane the second.

"I did not know that. It is an amazing honour," Ramphadi said a few hours after losing the doubles semi-final of a warm-up tournament in Australia.

The Tuks based player deservedly received a wildcard entry to play the Aussie Open. Over the past five years, he has improved his rankings in the men's quad singles by 72 positions. In 2017 Ramphadi's was ranked 90th. Currently, he is 18th.

But he has been ranked higher. Last year in October, he was 13th. He played brilliantly. In France, he contested two semi-finals. He also represented South Africa at the BNP Paribas World Team Cup in Sardinia, Italy. He was victorious against the USA's David Wagner (ranked 5th) and Japan's Koji Sugeno (ranked 6th).

It was the confidence booster Ramphadi needed. He now realises that he can beat the world's best on any given day. Still, he will never take anything for granted. Experience has taught him that what happened yesterday does not mean anything tomorrow.

The one thing the Tuks based player won't lack is motivation. There is a lot at stake. If he can win a game at the Aussie Open, he could play more Grand Slam Tournaments. If that happens, there is a real chance that he can establish himself as a top ten player in the world.

"But I don't want to get obsessed about winning. My goal now is to gain experience. For now, I am in the lucky position to be the underdog. So I have the privilege to enjoy every moment on the court."

When asked about his strengths as a player, Ramphadi said he is pretty fast on the court.

"There is nothing I love more than to chase after the ball. I will let rip with my forehand when I am in a good position. That is my on-court 'weapon'. My backhand  is steady."

Ramphadi was not always a fan of tennis. Football was his game when he grew up. Most mornings after breakfast, he would kick a ball around. What got his adrenaline pumping was when he got an opportunity to test his skills against rivals.

But everything changed at the age of 12. Ramphadi still remembers being on his way to school to write exams when he felt a pain in his legs. From then on, things started to deteriorate quite quickly. It got to a stage where he could not walk or feed himself. He was diagnosed with a severe bone disease.

Ramphadi admits to being down out using a wheelchair. He battled to accept that might never get an opportunity to participate in sport. But everything changed the day someone from the International Tennis Federation arrived at the school in Tzaneen to promote wheelchair tennis.

"I was at first reluctant to give it go, but after hitting a few balls, I realised I was actually quite good at it. More importantly, was that I was enjoying myself. Wheelchair tennis has given me a new lease on life. I am again able to physically test myself against others. To me, that is special."

The Tuks based Montjane will also be in action at the Aussie Open. In 2020 and 2021, she contested the semi-finals. 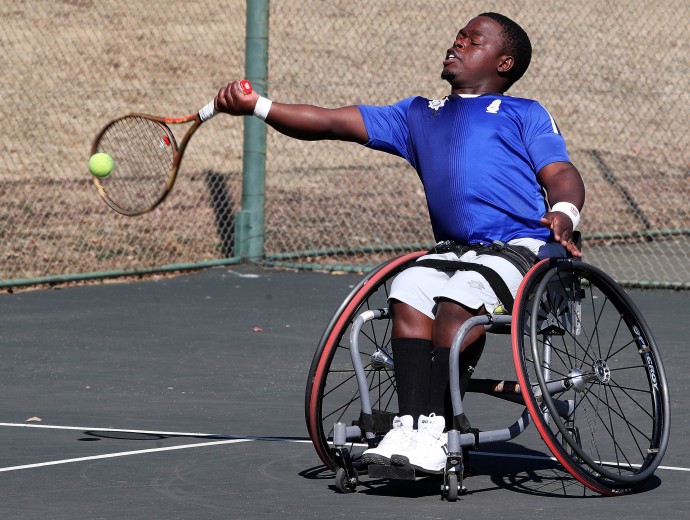