The Hatfield Tshwane Metro Police Department (TMPD) Satellite Station was officially opened on Monday, 4 November, in an attempt to improve safety and security in the Hatfield precinct.

The station is the result of a partnership between the University of Pretoria (UP), City of Tshwane, the Hatfield City Improvement District (CID), property agency City Property and other stakeholders in the Hatfield precinct. The suburb, which is home to several embassies, government departments and more than 40 000 university students and staff, has been plagued by contact and motor vehicle-related crime.

Tshwane Executive Mayor Stevens Mokgalapa said, “Hatfield is now in a position where it will have a satellite Tshwane Metropolitan Police Department station, two support vehicles and a CCTV monitoring system that will monitor 79 cameras that have been deployed throughout the precinct.” There will also be at least eight police officers on every shift. Furthermore, a 24-hour patrol will be initiated to safeguard the community. “This station will not only assist in crime prevention but will also act as an access point for the public to engage directly with TMPD, to report issues or make any inquiries.”

UP, as the largest stakeholder in the Hatfield Campus Village, both in terms of landholding in the suburb and its financial contribution to the Hatfield CID, donated two vehicles that will be used by the TMPD.

UP Vice-Chancellor and Principal Professor Tawana Kupe said at the station’s official opening that the long-term sustainability of the University “is inextricably tied up with an attractive, clean, safe and secure Hatfield and Tshwane in order to entice the calibre of staff and students that we need to join our University to allow us to achieve our objectives”. He stressed the importance of collaboration between stakeholders in achieving these goals.

He said safety and security were key in creating an environment where students are able to concentrate on their studies and expressed gratitude to the City and other stakeholders for making this possible. The event was marked by pomp and ceremony with a march-past by the Metro Police Band. Photo: Hatfield CID (H Vorster)

“We are grateful to the city for availing the personnel to fight criminality on our streets, but I want to express a special word of thanks to our stakeholders who have dug deep into their pockets to make both the Bicycle Unit and the Satellite Station possible. We know that the City’s coffers are stretched and that they cannot fund all of these costs of setting up and running the station by themselves. I am proud, therefore, that the property owners of this suburb have committed by contributing to funding the infrastructure to make these interventions possible,” said Prof Kupe.

“A comprehensive safety and security strategy was developed and adopted by the Hatfield CID board and the establishment of a Metro Police satellite station to ensure that we have 24/7 law enforcement on our streets – a big deterrent for criminals.” Karen Meyer, Member of the Mayoral Committee (MMC) for Community Safety and Emergency Services, said the establishment of the Hatfield TMPD Satellite Station would greatly enhance the operational deployment capacity of the TMPD and police visibility, both of which are essential in preventing crime. “As the MMC responsible for Community Safety and Emergency Services, including being tasked with oversight over the TMPD, I wish to thank the CID and its stakeholders for proving that constructive and meaningful partnerships are both possible and desirable in the fight against crime.

“Today’s event proves that such partnerships can be successful and are indeed essential in making Tshwane a safer and more secure City for all its residents.”

The event was marked by pomp and ceremony with a march-past by the Metro Police Band and the cutting of the ribbon to mark the opening of the station by Mayor Mokgalapa, while there was an air of festivity and celebration. 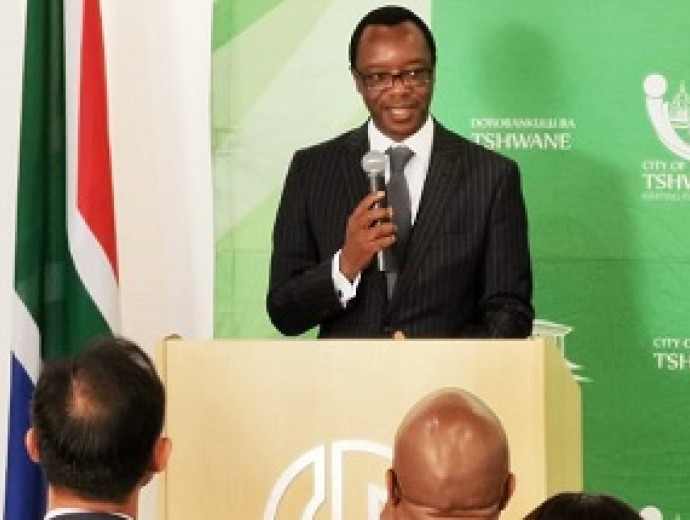 UP Vice-Chancellor and Principal Professor Tawana Kupe at the opening