The TuksRowing Club competed at the South African National Rowing Championships from the 25 – 26 April 2015. The club had a fantastic two days of racing; with 53 athletes racing from elite to novice the results couldn’t have been any better.

The heats where rowed on Saturday and the day ended early so that everyone could get plenty of rest for finals day on Sunday.

Sunday started off with a bang, the weather was playing its part with a slight tail wind blowing down the race course, it was the start of a great day of racing for Tuks. The Men’s A Single came down the course at a blistering pace with James Thompson taking Gold in a new course record for both Heavyweight and Lightweight men. The next 6 places where taken by Tuks athletes with a phenomenal performance by Lawrence Brittain at his first regatta back after conquering cancer. This was closely followed by the Women’s A Single which was won by Micheen Thornycroft also breaking the course record and closely followed by 3 other Tuks Women.

The results continued in this fashion as the day went on, another win in the Men’s A Pair by Shaun Keeling and David Hunt who narrowly missed out on breaking the course record. Tuks placed top 3 in the Men’s Pair. They were followed by the Women’s A eight winning in a nail biting finish against UJ. Tuks also had a junior Tuks eight in this race who placed 5th and will hopefully be joining our club in the future!

Then came our World Champions in the Men’s A double; James Thompson and John Smith who won in style by crushing their course record by 12 seconds. Tuks rowers also took 2nd place in this race.

The Men’s A four claimed a solid win in their race. Next up was the Women’s A pair of Naydene Smith and Lee-Ann Persse who had a solid row managing to break the course record by 13 seconds.

The Women’s A double of Ursula Grobler and Kirsten McCann had an outstanding race breaking the course record by 14 seconds. These two then hopped straight out of their boat and joined Naydene and Micheen to race the Women’s A four which they did in style by claiming yet another Gold for Tuks!

The final race of the day was the Men’s A eight. Tuks had 3 crews in this event which really demonstrated the depth of our club at this regatta. Tuks claimed 1st,3rd and 8th place in the event.

Overall the club performed fantastically walking away 7 new course records as well as the most wins in A division events and this meant we won the overall points trophy for the championship. 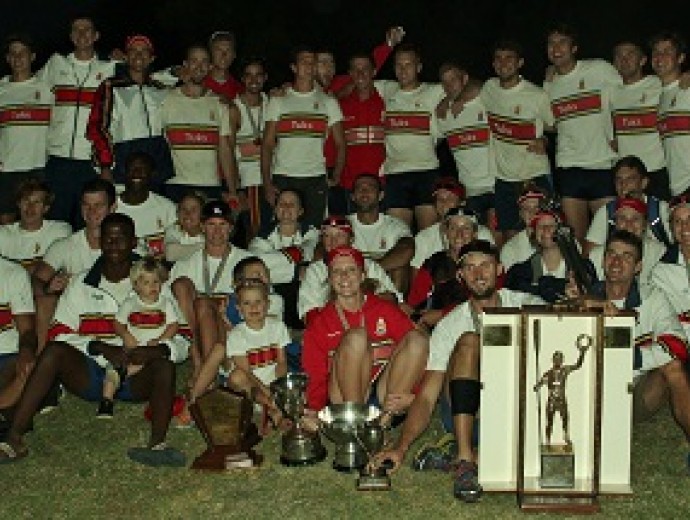