While kangaroos are distinguished for their well-developed hindlimbs which they use to hop across the Australian outback, it seems South Africa has its own unusual hopper – the springhare. A new study published in the Journal of Anatomy suggests that “the diminutive springhare is a bit better at hopping than its more famous Australian counterpart, at least when it comes to muscle-tendon design, and implications for fast and accelerative hopping”.

This is according to Dr Ned Snelling, a senior lecturer in the Department of Anatomy and Physiology at the University of Pretoria’s (UP) Faculty of Veterinary Science. He worked with scientists from Harvard and Idaho Universities as well as academics at Wits University, where they assessed the muscle-tendon design of the hindlimbs of springhares and compared it against 16 species of Australian hoppers.

“In the battle of the hoppers, it’s South Africa 1 and Australia 0,” Dr Snelling says. “We have long known that springhares are not hares but are a type of rodent. What we have not known, until now, is that springhares can claim some hopping prowess over Australia’s rat-kangaroos, wallabies and kangaroos.” An illustration of a springhare (credit: Amy Cheu)

The reason for studying the muscle tendons of the hindlimbs is because of their important role in locomotion, particularly hopping, with variations in position, arrangement and architecture facilitating profound distinctions in the animal’s ability for speed, acceleration and energy costs. The study revealed that while the two groups have independently evolved nearly identical hindlimb body plans for hopping, the springhares are equipped with relatively large tendon structures built into the hindlimbs, providing greater agility, manoeuvrability and acceleration capacities – attributes likely to be advantageous in predator-dense habitats of southern Africa.

Springhares (a placental mammal) and Australian hoppers (marsupial mammals with pouches to raise young) last shared a common ancestor about 160 million years ago, Dr Snelling explains. The two groups then independently evolved into a hopping state, and this study shows that they also, quite remarkably, arrived at virtually identical hindlimb body plans for hopping locomotion. “In other words, the two groups independently evolved the same hindlimb dimensions and postures for hopping locomotion.”

Nonetheless, the study also revealed an important distinction between the two groups. Springhares have evolved relatively thicker tendon structures, likely facilitating the rapid transfer of force from muscle to skeleton, enabling fast, accelerative hopping to outpace and outmanoeuvre predators. Dr Snelling explained that tendons are like lengths of elastic cord: “If you pull on a thin elastic cord, much of the force is lost in the stretch, but if you pull on a thick elastic cord, more force is transferred to the other end.” The same applies to tendon design. The key hindlimb locomotor tendons of springhares have a total cross-sectional area that is about 50% larger than that predicted for a hopper of its body size. These relatively thicker tendon structures mean that forces can be transferred more rapidly from the muscle to the skeletal attachment points in the feet, favouring speed and acceleration performance.

“Life is stressful if you’re a springhare – danger lurks behind every bush and over every dune, and just about every predator has you on their menu,” explains Gabriela Veiga of the School of Physiology at Wits, who led the dissections. The ability to engage in fast, accelerative hopping could assist springhares to outpace and outmanoeuvre predators, especially at night when foraging above ground.  This might help to explain, for example, why cheetahs have the lowest hunting success rates when pursuing springhares in the southern Kalahari.

As in life, costs and benefits are traded off against one another, and although the springhare’s relatively large tendon structures allow for fast, accelerative hopping, they also incur higher energy costs for hopping locomotion, explains Dr Snelling. On the one hand, the relatively thinner tendons of the large Australian hoppers, particularly wallabies and kangaroos, come close to snapping during fast hopping; on the other hand, it is a risk that allows for substantial energy recovery, so much so that these animals seemingly defy the laws of physics and physiology by uncoupling energy costs from hopping speed.

“We know this because scientists have trained wallabies and kangaroos to hop on treadmills with a face mask to measure energy costs,” Dr Snelling says. “This energy-efficient hopping is likely an adaptation that allows kangaroos to cover vast distances across the Australian outback without using too much energy.” Then again, the relatively thicker tendons of springhares will not stretch as much during fast hopping, and so energy costs are comparatively higher and increase linearly with hopping speed. For springhares, the need for fast, accelerative hopping to survive in predator-dense habitats has taken greater priority during its evolution.

The findings of this study show that South Africa’s springhare is equipped with a hindlimb muscle-tendon design that allows for faster and more accelerative hopping when compared with the more well-known hoppers of Australia. 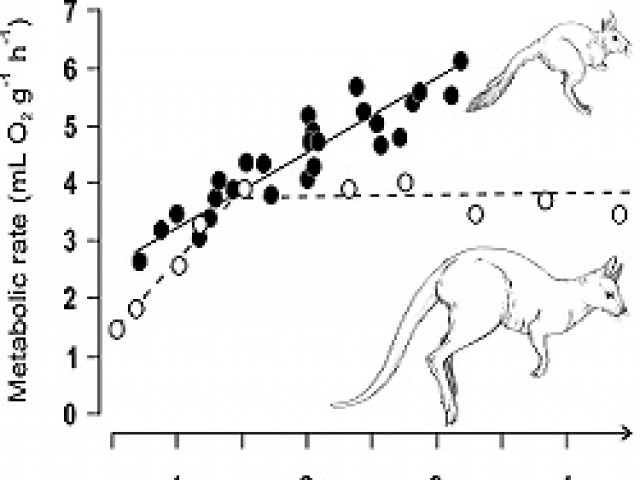 Springhares have relatively large tendon structures that allow for fast acceleration, but this comes at an energy cost for the animal (Credit: Edward Snelling and Amy Cheu, basiliskos.com).