Researchers at the Universities of Pretoria (UP) and Leicester are revolutionising the way tuberculosis (TB) is detected through the invention and application of a 3D-printed insert added to simple face-masks. This new approach has the potential to detect millions of currently missed infections across the world.

Designed and printed at Leicester University, the inserts reliably catch and retain live tuberculosis bacteria after people who may be infected have worn the adapted mask for just 30 minutes. This is the first time that exhalation from prospective patients with TB can be captured in such a quick and simple way.

Unlike a blood test, which cannot differentiate between active and quiescent TB, the masks provide rapid detection of captured bacteria, offering a more direct potential indicator of how infectious individuals are compared to traditional sputum samples; they also reduce the need for invasive investigation.

The TB bacterium globally causes more deaths due to infection than any other microbe. According to the World Health Organization, 301 000 people in South Africa fell ill with TB and 64 000 died from it in 2018. TB newly affects 10 million people worldwide, every year.

Professor Anton Stoltz, Head of Department in the Division of Infectious Diseases at UP, said this finding is particularly important because it makes early detection of TB easier and faster. “This is a potentially universal solution that can also benefit underprivileged communities, who still struggle with accessing healthcare. In South Africa when it comes to the treatment of TB, we speak of the ‘missing millions’. These are the people that have TB but aren't aware and are not diagnosed. As a result, healthcare professionals can't get to them. With this new method, we'll be able to test a lot more people, even those not exhibiting symptoms of the disease, and get them treated early. This way, we'll be able to save more lives, because early detection saves lives."

Prof Stoltz said his working relationship with the University of Leicester came about through a chance meeting between himself and Professor Mike Barer. The face masks have been fitted with a 3D-printed insert.

“Professor Barer and I met a few years ago. There was a call for scientists from the UK and South Africa to come together, work out a plan, and do some research together. From that first meeting, we started talking about what we want to do in South Africa. This is the first article that has been published, and there will be different things that we will publish in the future," he said. “I have been working for 10 years on TB and aerobiology. I am grateful to have been a part of this team; I think we gel well together, and I am excited about the work that we will continue to produce."

Prof Stoltz said future research would include studying TB in communities, as well as diagnosing TB in children, as these are the areas that are still a challenge to healthcare professionals and scientists.

The University of Leicester’s Professor Mike Barer said, “The fact that the mask is a low-cost and sensitive way to detect TB before it appears in sputum has huge implications for early detection of the disease and patients having earlier access to treatment. We are really excited about how we can take this forward and influence the spread of airborne infection.”

One of the most common symptoms of the disease is a persistent cough with phlegm. TB is usually diagnosed with a blood test, chest x-ray, phlegm sample and in some cases a bronchoscopy. Often when these symptoms present, the infection has already been in the body for months, and the person may have infected many others.

The findings, published online on The Lancet website on Tuesday 18 February 2020, have the potential to revolutionise the opportunity for early detection and prevention of the disease.

UP researchers worked in conjunction with a research team at the University of Leicester, initially sampling 24 people with confirmed TB over a 24-hour period, which showed that infectious TB was exhaled and spread when patients were asleep – a breakthrough in our understanding of the disease, demonstrating that a cough may not be required to spread the infection.

In addition, in a further trial of 20 patients with TB symptoms, four patients with negative sputum tested positive with the mask, and the presence of TB was only detected in their sputum six weeks later – demonstrating the accuracy of the test and highlighting the potential for early diagnosis.

UP Vice-Chancellor and Principal Professor Tawana Kupe said he is excited that UP researchers are once again at the forefront of producing research that will make a meaningful impact. “The University of Pretoria leads when it comes to producing research that will have an impact on the lives of people on the continent, and indeed around the world,” he said. “UP is committed to increasing our international collaborations in pursuit of solutions to Africa and the world’s myriad challenges, and I applaud both our Professor Anton Stoltz and the University of Leicester’s Professor Mike Barer on leading their teams in this successful partnership. We are confident that these findings will ultimately bring the world an important step closer to beating the scourge of TB.” 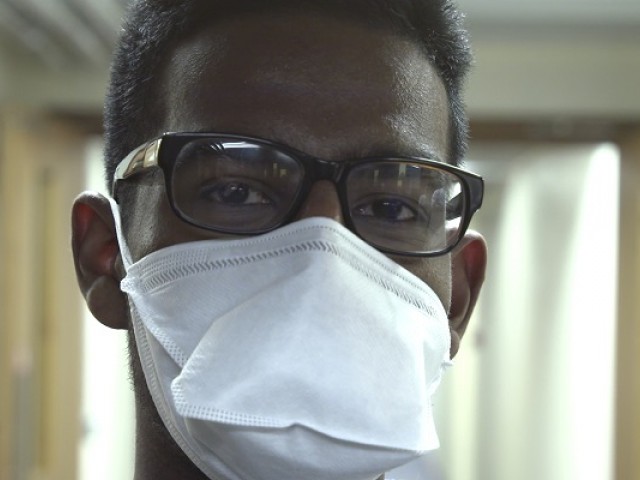 A man wearing a TB mask.