Is the Bible dangerous?

Throughout history, people have killed in the name of God. God’s name has been, and continues to be used to legitimise wars, genocide and even apartheid.

Well-known stories such as the “fall story” of Adam and Eve could be used to legitimise man’s dominion over woman. At face value, the “flood story” suggests that God decides to annihilate all of humanity, except for Noah and his family. So, does this make the Bible dangerous?

World-renowned theologian and Old Testament scholar Professor Thomas Römer, Rector of the prestigious Collège de France, delved into this big question during a lecture hosted by the University of Pretoria’s (UP) Faculty of Theology and Religion recently.

He said the Bible (referring to the Hebrew Bible, which many know as the Old Testament) could become a dangerous book if we refused to understand the historical contexts in which different texts were written. “We have to take seriously the ‘difficult texts’ of the Hebrew Bible, and not judge them according to what we think is ‘theoretically correct’,” he cautioned.

In Christianity, different attitudes persist when it comes to these difficult texts. Some may reject the Old Testament completely, opposing the violent demiurge of the Old Testament with a God of love in the New Testament. Others may justify the violence. Prof Römer countered these attitudes and stressed the importance of examining texts, contexts and documents outside of the actual Bible. The Bible should therefore be taught in a responsible way and read with an understanding of the history in which these stories developed. Failure to understand or consider the context of the book of Joshua, for example, highlights the damage that can be caused in a country. These texts were used in the ideology of land occupation in South Africa. “It is dishonest to trivialise these texts in the book of Joshua by ‘spiritualising’ them,” Prof Römer said.

Mirroring the story in the book of Joshua, apartheid South Africa legitimised oppression, domination and even extermination, in the name of God. But analysis of the historical context of the book of Joshua has found that this book is not even a historical document and the events detailed never happened in history. Prof Römer said the first records were likely to have been drafted at a time of Assyrian domination when military propaganda was rife. On closer inspection, some texts even reflect Assyrian laws.

Prof Römer said it was highly unlikely that a single author wrote the texts, but rather, the Bible was developed over time, in specific historical contexts. These texts also came from oral traditions.

“Looking at texts in their historical context informs us that they are often copies or even counter-stories of Assyrian texts, often served as ways to protest against Assyrian occupation, even to show God being as powerful as the Assyrian gods,” said Prof Römer. By understanding the historical contexts, these texts then become resistance statements as opposed to stories that legitimate violence and dominance. Out of context, however, these stories have a very different message, and wrongly make the Bible dangerous.

Further to the importance of understanding the historical context, Prof Römer said the social context of the reader and user of these texts was just as important to consider. “We cannot throw ‘violent’ texts out of the Bible since they confront us with or own violence.” Prof Römer continued: “We have the right and duty to disagree with biblical texts.”

Texts should also be considered in relation to other texts. In the “flood story”, for example, God at first responds to human violence with the violence of the flood, destroying humankind. But then God removes the possibility for himself to reiterate such a vengeance, saying: “I will never again curse the ground because of humankind, for the inclination of the human heart is evil from youth; nor will I ever again destroy every living creature as I have done.” (Genesis 8:21)

“This text emphasises the primacy of compassion, relativising all the texts that stage a violent and vengeful God,” explained Prof Römer.

So, is the Bible dangerous? “It becomes dangerous when we refuse to take into account the situations in which the biblical texts were written, as well as our own situation… If we refuse to do so, we will fall back into obscurantism,” Prof Römer warned.

* Prof Römer’s visit forms part of a Memorandum of Understanding (MOU) with the Collège de France and comes from a longstanding relationship between UP’s Department of Old Testament and Hebrew Scriptures and Prof Römer, who has been Extraordinary Professor there,  since 2012. UP’s faculties of Theology and Religion; Humanities and Natural and Agricultural Sciences are part of the agreement which includes the exchange of staff members between the two institutions, as well as the possibility for doctoral students and postdoctoral fellows to be hosted at the other institutions. 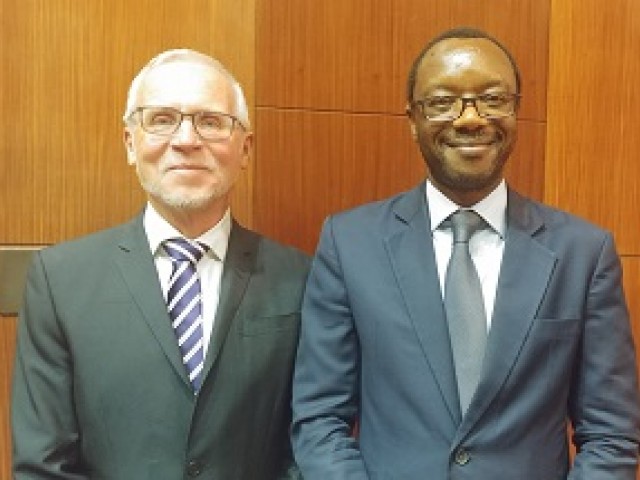