A BioBlitz is an intense biodiversity survey that attempts to record all living species within a designated area over a predetermined time period. The primary objectives of such a survey are to form an idea of the wealth of species in a particular area and to make the local community aware of the diversity around them. The presence of endangered species will also be noted. A team consisting of amateur naturalists and students from the Department of Zoology and Entomology at the University of Pretoria (UP) planned the 2015 BioBlitz, which will take place in the Limpopo mining town of Lephalale (Ellisras) from 13 to 15 March. A number of staff members, students and associates of the Department will be donating their time towards the event, and several experts (amateurs and professionals) from across the country will assist with collecting and identifying specimens.

The survey will involve the gathering of data on the presence of as many different species in as many different taxa (organism groups) as possible. The data will prove useful to specialists and others in the field of conservation. One of the main reasons for organising the 2014 BioBlitz was to give experts in various fields an opportunity to learn more about other animal groups. According to Nina Parry, an MSc student and one of the organisers of the event, ’a BioBlitz can be vitally important to someone who is studying a group of animals and needs to understand their ecological interactions, as it provides information on how the presence of other animals may affect their presence, prevalence, overall distribution and behaviour.’ She further noted that while many researchers’ knowledge of fields outside their own areas of specialisation may be limited, they are keen to learn more and can  benefit from the information gained through a BioBlitz. Once a full report has been compiled, the data will also be shared with the public and other interested parties.

The first BioBlitz, held in Lephalale in March 2014, was very successful and 619 species were recorded in the designated area. Considering that only nine people (six experts and three volunteers) took part in last year’s exercise, Parry is hopeful that this year’s bigger team will record at least 1 000 species in the 48-hour period. This year’s team includes more than 20 experts from across the country, six of which are from UP. UP master’s and PhD students in the team are Nina Parry (a Diptera specialist); Arne Verhoef (a general entomology specialist); Deon Bakkes (a Neuroptera specialist) and Dina Fagir (a small mammals and parasite specialist). Other members representing the Department include Christiaan Deschodt, who will be involved in identifying the scarab beetles that will be collected; Prof Mervyn Mansell, who will assist with the identification of lacewings and flies; and Ian Engelbrecht, a PhD candidate, whose field of expertise is the identification of scorpions.

The 2015 BioBlitz will be held on the same farm as last year’s event. This farm is situated in an extremely species-rich but relatively poorly surveyed area. Parry, who is positive that this year’s BioBlitz will successfully record the species of the area, said that another area that has not been well studied will probably be chosen for the 2016 event so that the data collected can have greater value. This year’s Bioblitz has aroused the interest of the producers of the television programme 50/50, who will be sending a crew to report on the activities. 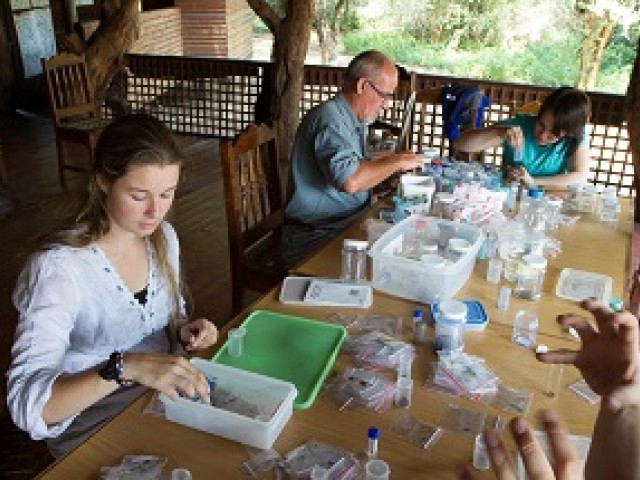