Clear track to the future

The South African government have announced that more than R300 billion will be invested in transport infrastructure over the next three years in an effort to reduce road deaths and traffic congestion, while also expanding the country’s cargo transport capabilities. The lion’s share of this amount will go towards upgrading and expanding the national rail network. According to a statement made by Public Enterprises Minister Malusi Gigaba, the planned infrastructure projects for this sector will not only relieve the burden on our roads, but will also significantly increase the country's export capacity, rejuvenate the economy, create jobs and address poverty and inequality.

The importance of rail transport in South Africa has never been more prominent than in recent years – a notion that is supported wholeheartedly by both Transnet and the South African government. Prof Hannes Gräbe, incumbent of the Chair in Railway Engineering at the University of Pretoria (UP), is convinced that researchers at the University, in collaboration with railway stakeholders, have the technical expertise and facilities needed to be a leader in railway engineering in Africa.

Rail infrastructure is a critical part of any country’s supply chain as it enables the efficient movement of large quantities of goods while having a minimal impact on the people and communities that it serves. Research has shown that transport by rail is three times more fuel efficient than conventional road transport, which means that gas emissions can be decreased significantly. Efficient and effective freight rail transportation in South Africa will reduce the number of heavy transport vehicles that are currently using the road infrastructure, thereby improving safety on our roads and making South African commodities more affordable for consumers. Additional economic benefits that the country can look forward to once its new railway infrastructure is in place include lower expenditure associated with road maintenance, policing and accidents.

According to Prof Gräbe, skills transfer, teaching and continued education are keys to unlocking the potential required to achieve short- and long-term goals in the rail industry, and investment in research and development will increase the competitive edge that transport by rail has over other modes of transport.

The Chair in Railway Engineering in the Department of Civil Engineering at the University of Pretoria was established 21 years ago when Spoornet (now Transnet Freight Rail) initiated a partnership between industry and the University. This partnership revolves around three major activities, namely graduate training, continuing industry-oriented education and railway research.

The chair places a strong focus on track infrastructure research and is very active in the fields of conventional ballasted and unconventional track structure performance, track maintenance models, maintenance limits and condition monitoring, stress and strain measurement systems, asset management, and maintenance management strategies and philosophies. The chair is also actively involved in the development of non-destructive track condition monitoring technologies such as ground- penetrating radar.

A proper understanding of railway infrastructure management is paramount in the railway engineering field, which makes the research of Prof Gräbe and his team especially relevant in terms of the country’s planned rail infrastructure projects. Investment in track infrastructure represents significant social, economic and environmental decisions, and is likely to have a major long-term impact on all three of these societal spheres. The research being done at the University, along with the skills transferred to industry, will inform decision making about the life cycle of rail infrastructure so as to avoid system failures that may lead to expensive production losses and could also impact negatively on the environment and consumer safety.

Researchers at the University have access to two railway test tracks on the University’s experimental farm. One is a 30 m conventional railway track section, while the other, a more recent addition to the University’s research facilities, is an 18 m tubular modular track section. The track structures conform to heavy-haul track structure design requirements and are ideal for full-scale stress and strain tests in a controlled environment, testing of the effect of moisture on the strength of the track foundation under load conditions, evaluating earthworks specifications under load conditions and under different moisture conditions, and evaluating different foundation characterisation methodologies and equipment.

The researchers are also well equipped to conduct standard laboratory tests on various track components as they have access to a range of tests and laboratory experiments that can be conducted in the civil engineering laboratory. These tests include standard sleeper-bending tests to the specifications of the American Railway Engineering and Maintenance-of-Way Association (AREMA)  or any other standard specification, full-scale tests on sleeper components, such as rails, sleepers, pads and ballast, static and dynamic fatigue tests, testing of slab track components, testing of USPs (under-sleeper pads), and special non-standard tests designed and configured in accordance with the client’s request.

At a recent function held to celebrate the UP Chair in Railway Engineering’s 21-year relationship with Transnet, the Dean of the Faculty of Engineering, Built Environment and Information Technology, Prof Sunil Maharaj, mentioned that the University's relationship with Transnet is a sterling example of how academia and industry partner to meet the greater needs of society. He said that the faculty's strength lies in forging relationships with industries and serving them by offering globally competitive courses.

The University of Pretoria’s School of Engineering is ranked among the top 1% of engineering schools in the world and will be celebrating the world-class education it offers on its 60th birthday next year. 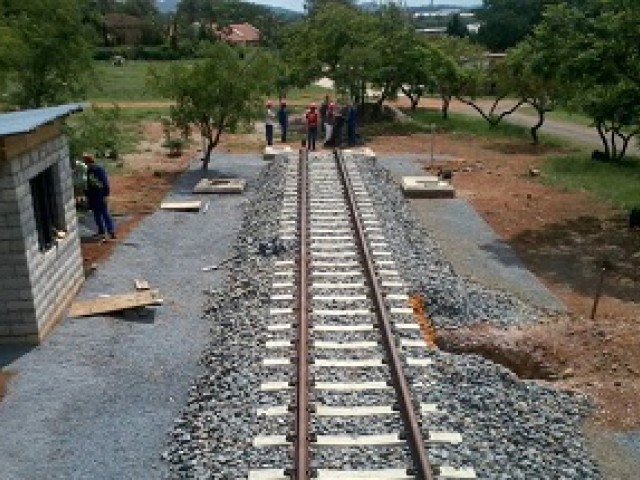