Saving vultures across the world

The sight of more than 200 vultures circling hundreds of metres up in the sky is a picture not many get to experience anymore. But not very long ago vultures flew freely in abundance.

As recently as the 1980s, the Oriental white-backed vulture was considered one of the most prominent bird species in the world, with numbers almost on a par with what one would expect for the common pigeon. In India, Pakistan and Nepal, vulture populations soared to over 10 million. Culturally, cattle in these areas are regarded as sacred and are left to die only from natural causes. The abundance of food in the form of cattle carcasses was one of the main reasons why the South Asian vulture population was growing exponentially.

Over the years, however, researchers began noticing a decline in the number of vultures, with the population dropping from over 10 million to fewer than 10 000 in a 10-year period. The reasons for this extraordinary drop were at first unknown. A series of investigations into possible causes led to the discovery that non-steroid anti-inflammatory drugs (NSAIDs) present in the meat of cattle carcasses were responsible. To relieve aged cattle from any physical pain, cattle owners were treating them with the NSAID diclofenac, commonly known in South Africa as Voltaren. The contaminated meat consumed by the vultures was causing renal failure and subsequent death. This secondary exposure to diclofenac was proving enough to kill vultures, resulting in their massive decline to an alarming level.

With the threat of extinction too close for comfort, conservationists realised something had to be done urgently. The steps that followed to save the species were not without obstacles. Because vultures had always been plentiful, there was no captive breeding programme in place. Vultures were not even found in local zoos. Testing birds to better understand the reasons behind the toxicity of diclofenac was therefore not possible. Furthermore, diclofenac had to be removed from the market, but with the sanctity of cattle far outweighing the perceived status of vultures, this was no easy task. Nevertheless, after much deliberation, authorities agreed that diclofenac could be removed from the system if a suitable alternative could be found.

It was after these inhibiting factors presented themselves that the Faculty of Veterinary Science of the University of Pretoria (UP) became involved. Considering that the African white-backed vulture (Gyps africanus) is very similar to its South Asian cousin, the Asian white-backed vulture (Gyps bengalensis), UP concluded that South Africa’s local vultures would also be susceptible to certain NSAIDs. As part of an international team committed to saving the South Asian species, UP, in partnership with an NPO that runs a vulture conservation programme headed by Kerri Wolter, and the Royal Society for the Protection of Birds (RSPB), had the testing facilities as well as captive vultures available to do the necessary tests.

Prof Vinny Naidoo, director of UP’s Biomedical Research Centre (UPBRC) and specialist veterinary pharmacologist with the South African Veterinary Council (SAVC), has led the way to find suitable NSAID alternatives that would be safe for vultures. For the past few years, Naidoo has been conducting a range of tests on the effects of alternative drugs, continuously supplying information to international governmental authorities. His research is funded mainly by the RSPB. A series of initial tests are conducted in the Faculty’s laboratories, first ensuring that drugs are safe in lab conditions before testing them on live birds. Once this has been determined, testing takes place at the Vulture Conservation Programme (VulPro) where captive birds are selected and given meat laced with alternative drugs. In a final test, the vulture is then dosed directly to see if and how it is affected.

Naidoo’s successful identification of suitable NSAID alternatives such as meloxicam induced the governments of India, Nepal and Pakistan to change their policies and prohibit the use of diclofenac in veterinary medicine. Diclofenac was also no longer allowed to be manufactured in or imported into their countries.

Naidoo has remained actively involved in finding suitable alternatives of NSAIDs. His most recent discovery is the highly toxic effects ketoprofen has on vultures. This has led to the Bangladesh government starting the process to have ketoprofen phased out for veterinary use. His research has had a significant effect not only on the preservation of a bird that was rapidly plummeting into extinction in southern Asia, but has also resulted in the South African government issuing a moratorium on veterinary diclofenac. While diclofenac has never been registered in South Africa, Naidoo’s results have prompted the country to take the necessary preventative measures. His findings also formed part of a paper that highlighted the dangers of veterinary medicines to the environment, published in the world-renowned journal Science at the end of last year.

For the first time since 2002, the South Asian vulture population is recovering, Naidoo says. While it will never return to millions, populations are at least no longer decreasing. Naidoo credits the rise of populations to the removal of these dangerous NSAIDs. His quest continues as part of an international team lobbying for the banning of diclofenac and other harmful NSAIDs in countries where vultures occur and these drugs are registered, such as Spain.

While vultures have long been unfairly regarded as being ugly and dirty, what people often fail to realise is their fundamental role in a thriving ecosystem. Without vultures, animal carcasses will go uneaten and be left to rot in the sun, constituting a breeding ground for pests and infectious diseases such as anthrax and posing a great threat to human health. The importance of an abundance of vultures therefore goes far beyond the picturesque sighting of over 200 vultures circling above. 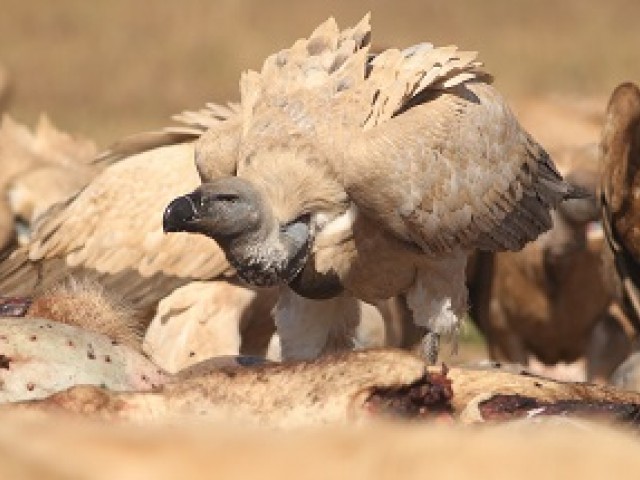