Identity and diversity in SA examined through groundbreaking research

In a first of its kind study in South Africa, Wendy Carvalho-Malekane, lecturer in the Department of Humanities Education, researched how young adults in post-apartheid South Africa construct an identity, with the emphasis on individuals with a biracial heritage.

“These are individuals who are products of interracial relationships, with parents from two different racial groups. I aimed to find out how these young South African adults construct an identity, specifically in such a racialised society where individuals  are prescribed racial identities according to their general physical appearance.”

Born of an interracial  marriage herself, her mother being white and Spanish and her father black and Tswana, this is a topic close to Wendy’s heart. She completed her undergraduate studies in Psychology at UP, after which she specialised in Educational Psychology. Her PhD study sample included ten young men and women of biracial heritages between the ages of 18 and 25 living in Gauteng.

Race as a social construct

Recognition and acknowledgment of the existence of multiracial populations by the dominant groups of societies are lacking, specifically within the South African context. The biracial perspective is marginalised and a culture of silence exists within local and indigenous literature. To this end, this research study aimed to build upon existing, but primarily international, racial identity theory by exploring the way in which young adults narrate their biracial identity construction within a South African context.

Wendy explains that race has permeated every level of social discourse within South African society, therefore we cannot remove race from the discussion of identity as we cannot examine identity in South Africa without considering race.

“My view of race as a social construct is that the categorisation of race is created by society, according to economic, social, political, historical and national frameworks, rather than biological or genetic differences between racial groups.”

To recognise and respect the different multiplicities is a contemporary concern. Wendy hopes that her research could possibly assist people to understand and support others’ diverse identities and backgrounds, as well as to create communities where people are respected and celebrated for their differences.

Navigating in the new South Africa

Wendy set off on her research journey four years ago to find out how biracial young adults navigate the world with two different racial backgrounds and how they understand their unique experiences and perspectives as biracial individuals within a South African social context.

Since the end of apartheid, interracial marriages within South Africa are on the increase and currently account for approximately 3% of all marriages. Thus, the amount of individuals with a biracial heritage has created an increased need for comprehending their unique perspectives.  Post-apartheid South Africa represents a period during which South Africans are negotiating and renegotiating their identities.

Interestingly, most of the young participants in this study challenged the rigid racial categories in the current political context by identifying themselves with biracial markers and describing their experiences as biracial individuals. The young adults chose to recognise both sides of their heritages and classify themselves as being members of two racial groups.

“I found that the participants were like chameleons, sometimes they would identify with a certain race for the benefits it might hold for them. Many of the young adults didn’t like to be categorised according to race, but rather according to their religious, cultural or national identities or chose to be viewed as ‘just’ human.”

She adds that South Africa is still such a young democracy, and our diverse population is still getting to know each other.

“We must definitely still discuss race, as it affected everyone in the country, everyone was forced to take on a prescribed identity. In the new South Africa, everyone must still figure out their own identity and decide how they want to be labeled.”

Wendy lectures modules on education, diversity and multicultural education at Groenkloof Campus. She believes that acknowledging and appreciating the diverse identities in SA may enable lecturers to better respond to students’ individual academic needs. This research may also assist lecturers in the Faculty of Education in preparing students to work effectively within multiracial and multicultural school environments.

“I think it is important to understand the diverse identities on campus, whether it is racial, cultural, religious or linguistic identities. By acknowledging and respecting the diversity on campus, we create an environment that understands and supports our students and treats them fairly.”

She adds that future teachers need to be prepared to work effectively with diverse colleagues and learners in the school context and to relate positively to their learners regardless of their racial and cultural identities.

“We are tasked with filling the cracks in society with knowledge about each other, mending the fears within society and making people understand that identity is an asset and a tool within society, in order to promote integration and create a cohesive and productive society.”

Wendy is planning on expanding this study in the future.

“I aim to write a book regarding biracial identity construction within a South African context, and I am currently working on a documentary film on the subject with my biracial South African peers.” 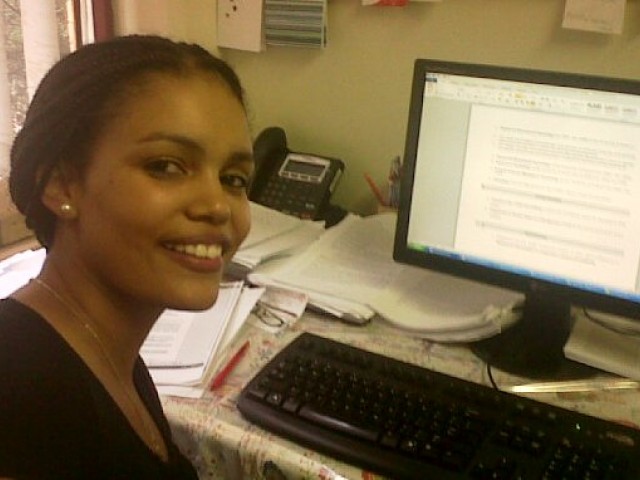