Vibrant life in the ground below

Few of us spend our days thinking about the forms of life that exist beneath us; even fewer imagine castles of clay and flourishing life in the soils below. Endemic to the soils of Africa is the fascinating small mammal known as the mole-rat that lives underground, excavating burrow systems that may extend for more than a kilometre. These clay castles have areas designated as sleeping parlours, others as pantries to store food and still others strictly designated as toilets.

Mole-rats are nothing if not fascinating – their sociality, body structure diversity, and their ability to increase plant life above ground in the vicinity of the area they occupy underground are just some of the things that keep researchers enthralled. New species are being discovered and added to the already identified 32, with the latest species just found in Tanzania. The differences between species are far greater than their size although the smallest adult, the naked mole-rat, weighs as little as 20 grams and the largest, the Cape dune mole-rat, exceeds two kilograms in mass.

Mole-rat species are either solitary or social, but all feed on geophytes, the underground storage organs of plants. Solitary species are typically found in areas that are mesic, or  moister, as opposed to social species that have adapted to dry environments known as xeric areas. The wonders of nature are evident in these habitat preferences. In the mesic areas, food is evenly distributed so the solitary mole-rat does not have to dig very far to find its food. In arid areas, however, the workforce of the colony has to excavate very long burrows in order to get to the food source and there are only short windows of opportunity when this can occur, namely after a period of good rainfall, which occurs sporadically and is unpredictable. Burrow excavation using (perpetually growing) incisors causes the teeth to wear down, but with up to 30 members in a colony, food is reached quicker, reducing the wear on their teeth. Food is then shared among the colony members and excess items are stored in a carefully crafted pantry.

The incumbent of the South African Research Chair of Mammal Behavioural Ecology and Ecophysiology, Prof Nigel Bennett*, has dedicated most of his career to researching mole-rats. His main area of focus has been to better understand the modes and mechanisms responsible for reproductive suppression in the non-reproductive females of various species.

The very specific roles of animals within social colonies add to the interest of mole-rats.   Colonies have distinct divisions of labour that are based on reproductive abilities. Exactly why some members of a colony are able to reproduce and others are not remains to be confirmed, but Bennett has found it particularly captivating to try to figure out how the colony’s queen is able to suppress the reproduction of the working non-breeders. By looking at the hormone levels in the different animals, Bennett is trying to unravel where and how suppression takes place. He is currently investigating the different hormone concentrations released from different regions of the brain in order to provide a possible explanation for how the queen inhibits reproduction in some members.

What make these mammals even more complex are the vast differences not only between solitary and social species, but between the different social species. In naked mole-rats, found in parts of East Africa, for instance, both non-reproductive males and females are physiologically suppressed. In the Damaraland mole-rat, found across parts of southern Africa, a completely different pattern is observed. Only the non-breeding females are physiologically suppressed. The non-breeding animals can be divided into frequent workers (those animals that perform large amounts of burrow maintenance) and infrequent workers (those that perform relatively little work).

Bennett is collaborating with a research team from Cambridge University to determine how these divisions occur, using epigenetics (the study of chemical reactions and the factors that influence them). Results have already shown that there are different metabolic rates between the two groups of animals in a colony, for example between the frequent workers and the infrequent workers. In 2006, Bennett and his research team published these findings in Nature, a distinguished international weekly journal of science. The article precipitated a large amount of research into and debate on this area of study and has resulted in a number of scientists becoming eager to solve this evolutionary puzzle of why some animals work unselfishly for the good of the colony.

Solitary species display different reproductive patterns entirely. These mole-rats are described as highly xenophobic. They do, however, seem to believe in courtship before mating takes place. Using seismic communication, the male will signal his intention to mate and make his way to the female by drumming sounds to let her know he means no malice. As soon as they have mated, though, the female tires of him and chases him from her area. Babies stay with their mothers for about 45 days, after which they disperse along new little tunnels, setting up burrow systems of their own.

Bennett conducts his research in the field through a mark recapture system, capturing mole-rats every six months over a number of years and monitoring the changes in colony composition. He also studies them in the laboratory, measuring hormone concentrations and investigating immunohistochemical binding in different parts of the brain. He also collected genetic material from over 2 500 animals over a 13 year period from one population of mole-rats in Namibia and established that the breeding pair is genetically unrelated. He and colleagues in London have shown that colonies may possess litters exhibiting multiple paternity, but of which only one father remains in the colony. This suggests that some males enter the colony transiently, mate with the queen and then exit before they are detected and sent packing. Bennett has contributed significantly to knowledge of the sociality of and reproductive suppression in these fascinating creatures and is recognised as one of the leading experts in his field.

While much is still being discovered about these spellbinding little animals, one thing is certain, the soil is much richer in elements like calcium, nitrogen and phosphorus where mole-rats occur. This results in more diverse plant life. Mole-rats are thus eco-engineers and vital to a healthy and thriving environment.

*Prof Nigel Bennett is also the incumbent of the Austin Roberts Chair of Mammalogy in the Department of Zoology and Entomology in the Faculty of Natural and Agricultural Sciences at the University of Pretoria. 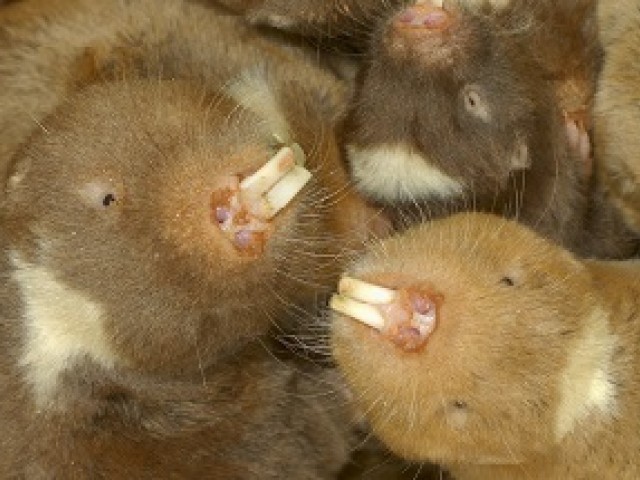