Seed Science research at UP

Seed Science research, such as seed health tests, general seed pathology, seed vigour and seed germination as determined by the International Seed Testing Association (ISTA) rules, is continuously performed by the University of Pretoria (UP) Seed Science Group, which is led by Prof Terry Aveling from the Department of Microbiology and Plant Pathology. The Seed Science Group forms part of the Forestry and Agricultural Biotechnology Institute. The research team recently moved to the newly renovated Phytotron C building on the University Experimental Farm which is equipped with two large laboratories and walk-in growth rooms.

Prof Aveling has been involved with ISTA for many years and was vice-chairman of the ISTA Seed Storage Committee (2001-2007), chairman of the Seed Health Committee for the periods 2007-2010 and 2010-2013 and is currently vice-chairman of this committee (2013-2016). The team is also involved in evaluating industry (for example, Syngenta, Bayer and BASF), and developing novel, environmentally sustainable seed treatments. The research focuses on grains, herbs, and vegetables. Some of the research forms part of an EU FP7 project, called TESTA. Prof Aveling is the leader of one of the seven work-packages.

Apart from its collaboration within the EU project, the team also maintains strong ties with the University of Almeria, Spain and the Poznan University of Life Sciences, Poland. Prof Aveling was appointed as Chairman of the Seed Pathology Committee of the International Society of Plant Pathology (ISPP) in 2013 and currently holds this position.

The research team recently moved to the newly renovated Phytotron C building on the University Experimental Farm which is equipped with two large laboratories and walk-in growth rooms. 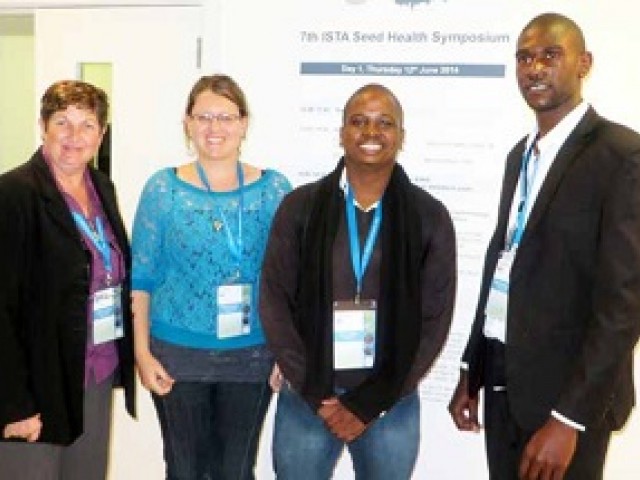 Members of the Seed Science group attending an international symposium in Edinburgh, Scotland earlier this year