Mapping trade networks in the Mapungubwe state is revealing complex political and social structures and changing researchers’ ideas of how the Great Kingdom was structured and operated.

Archaeologists have long known that the social and political structures of the Great Kingdom of Mapungubwe were unconventional, and UP researcher Kefilwe Rammutloa uncovered further complexity in her Master’s research. She has assembled a database of goods found at multiple sites in the Greater Mapungubwe Landscape (which extends from the northern parts of South Africa to Botswana and Zimbabwe) to find hidden trade networks and see what they can tell us about the politics of the earliest complex society in southern Africa.

Having grown up in Mamelodi, Pretoria, Rammutloa has always been interested in past societies, human evolution, heritage and ancestry. While enrolled for heritage studies at the University of Pretoria, she majored in archaeology, where she found an environment that nurtured her passions and interests.

Over the course of her studies, she was encouraged to stay abreast of the latest developments in archaeology, which emboldened her to continue her studies in this field. Her journey eventually led her to her Master’s research where she focused on trade and exchange networks in the Greater Mapungubwe Landscape.

She studied trade relations between 700 and 1400 CE, a period she found interesting as it was during this time that the region witnessed the emergence of social and political complexity.

“I wanted to find out how the political changes in the region affected the trade networks at the time,” she says. “I studied materials such as glass beads that came through the Indian Ocean trade network system and how these materials were redistributed in the landscape.”

Rammutloa also studied metals such as gold, copper and iron, which were mined in certain areas within the landscape. “Gold and copper for example were highly valued. I am interested in how these goods were controlled, distributed and redistributed in the landscape,” she explains.

As part of her research she also explored how these materials, usually in the form of jewellery and ornaments, informed the relationship between elites and commoners throughout the landscape. She gathered data on the different materials from multiple sites and entered this data into geographic information system (GIS) mapping software to get a better understanding of the trade networks in the area. Her work on this front is on-going.

Dusting away the mystery surrounding this period, a picture has started to emerge that Rammutloa says highlights the complexity of the political systems and the distribution of these material cultures.

Conventional research suggests that the elite community of Mapungubwe were in control of the trade networks, meaning that they controlled the distribution of these exotic materials throughout the landscape. However, Rammutloa has found that while there are areas surrounding the capital at Mapungubwe hill that do not have evidence of these materials, these luxury goods were plentiful at sites at the edges of the kingdom.

“This indicates that people were interacting, that they had social, trade and exchange networks of their own without needing to go to Mapungubwe to trade with the kingdom,” she says. “There was circulation of goods, which indicates relationships among the peoples living in the periphery.”

These findings show that the control that the capital had on trade and on the larger society seems to have been much more complex than previously thought.

“Sometimes, on the map, you can see that there are some materials that are found in the settlements away from Mapungubwe hill, that are not available at the capital itself,” she says. “These materials, such as ivory, showed that the settlements were able to trade among themselves outside of the capital.”

Rammutloa is continuing her work in archaeological research at Yale University where she is currently pursuing her PhD. 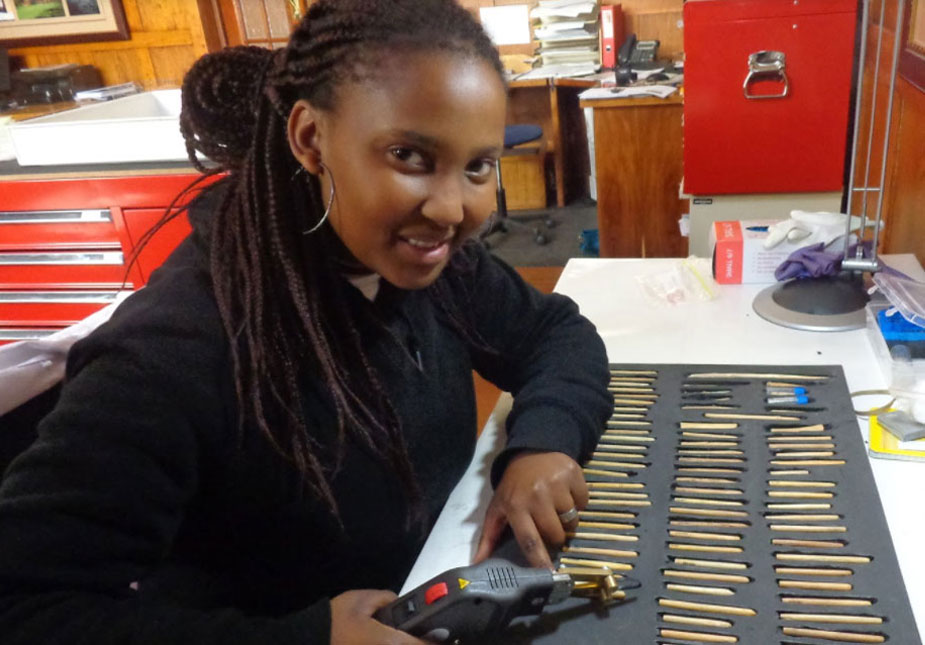