The African Academy of Sciences and the Royal Society, supported by the UK’s Global Challenges Research Fund, recently announced the second group of recipients of the Future Leaders African Independent Research (FLAIR) fellowship. This is awarded to outstanding early-career African scientists whose research focuses on the needs of the continent.

Prof Visagie, Associate Professor at FABI, said that this is the funding he needs “to really expand and establish my research in the agricultural space”. His work is on fungi that produce mycotoxins, one of the biggest threats to African food security.

Mycotoxin contamination of food and feed pose serious threats to human and animal health in Africa, and often leads to death. According to the Food and Agricultural Organisation, 25% of crops are contaminated with fungi and mycotoxins. This leaves a high percentage of Africans, mostly from the poorest communities, and animals at high risk. Prof Visagie’s project aims to expand, document and disseminate our understanding of the diversity of mycotoxigenic fungi and mycotoxins in food and feed across South Africa.

Dr Muema is a postdoctoral fellow in the division of Microbiology in the Department of Biochemistry, Genetics and Microbiology at FABI. “As an early-career soil scientist, I see the FLAIR fellowship as a golden opportunity to establish myself, and contribute towards Africa’s food security and sustainable development,” she said. “The enablement to also include master’s students in my project will assist me in growing my career as I contribute to human capital development.”

Chickpeas not only provide nutrition but also use passenger bacteria, rhizobia, to lock nitrogen into soils, which are weathered and infertile in parts of South Africa. Dr Muema aims to identify local species of rhizobia to better understand their interaction with chickpeas, leading eventually to enhanced crop production and soil fertility. The aim of this project is to identify the diversity of native soil rhizobia that are compatible with chickpeas in different agro-ecological zones in South Africa.

Dr Gudrun Dittrich-Schröder is a postdoctoral fellow at FABI and the Department of Zoology and Entomology. She will lead investigations into the potential of CRISPR/Cas9 gene editing tools to manage invasive insect pests in agriculture and forestry. This fellowship allows her to work on cutting-edge research that addresses challenges on the continent.

The agricultural and forestry sectors are critical for future food security, are drivers of the economy and are critically linked to jobs. But pests and diseases are the biggest threats to these sectors. Current control measures cannot keep pace with the increase in pests and diseases –CRISPR/Cas9 gene editing provides a revolutionary method to control pest species. Specific areas in the genome of an insect can be targeted using CRISPR/Cas9 and by using gene drive, may promote the inheritance, and prevalence as a result, of this edited gene in pest populations. Dr Dittrich-Schröder will be using insect species from forestry and agriculture to develop and apply these tools.

“These are three outstanding young researchers,” said Prof Bernard Slippers, Director of FABI. “We are delighted with the awards and are very proud of them. I have no doubt that the fellowships will provide a significant boost to the next phase of their careers. The fellowships are not only very prestigious, but also generous in terms of the support, networks and training they offer. We are passionate about the mentorship and development of young researchers in FABI and will do everything we can to support them.” 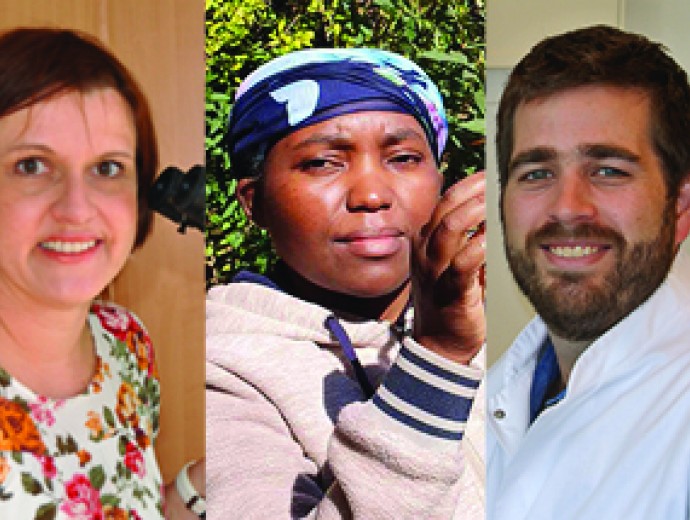