Tuks rower Thabelo Masutha made local rowing history in East London recently when he won the Silver Single Sculls-race at the Buffalo Regatta.

At 19, he is the youngest winner ever of a race steeped in history. He is also the first black rower to lift the coveted trophy.

A victory at the Buffalo Regatta is an achievement every local rower would like to add to his CV, as it is the oldest regatta in South Africa. The first regatta took place in 1879.

It is not the first time Masutha has pushed the boundaries in South African rowing. In 2017, he won a bronze medal in the single sculls during the World Junior Championships to become the first black rower to do so.

Another first for South African black rowing was in 2012 when Sizwe Ndlovu was part of the “Awesome Foursome” who won gold at the Olympic Games in London.

If Masutha has his way, it won’t be the last time a black rower graces the podium at the Games. It was expected that the 19-year-old Tuks rower would opt to compete at the World Under-23 Championships where he was a definite medal contender, but he has decided to give these championships a miss, rather opting to compete at the Senior World Championships with the aim of qualifying in the single sculls for next year’s Olympic Games in Tokyo.

Masutha admits he is facing a tough challenge. His best time is about 30 seconds slower than the world’s best, but then again, rowing is not only about times. It is about pure guts and an absolute hunger, which Masutha has in abundance.

This he proved last year when he competed for the first time at the World Senior Championships and qualifying for the quarterfinals beating an Olympic bronze medallist in the repêchage. At 19, he was by far the youngest competitor in the single sculls.

Recently, during Silver Single Sculls final, Masutha showed he could also be a cunning strategist.

From experience and doing his homework beforehand, he pre-empted what the other main protagonists, Luc Daffarn and David Hunt, might do. As he expected, Daffarn was off to a quick start, while Hunt got stronger through the middle part of the race.

“It was important to stick to my race plan, biding my time to make that final move that would decide the outcome. With about 400 metres left, I was rowing stroke for stroke with Luc, so I decided to up my stroke rate a bit. Luc countered, but the moment he did so, I attacked again. That was it. I was in the lead and controlled the race,” said the Tuks rower.

He ended up beating Daffarn by more than four seconds with Hunt a few more seconds adrift. 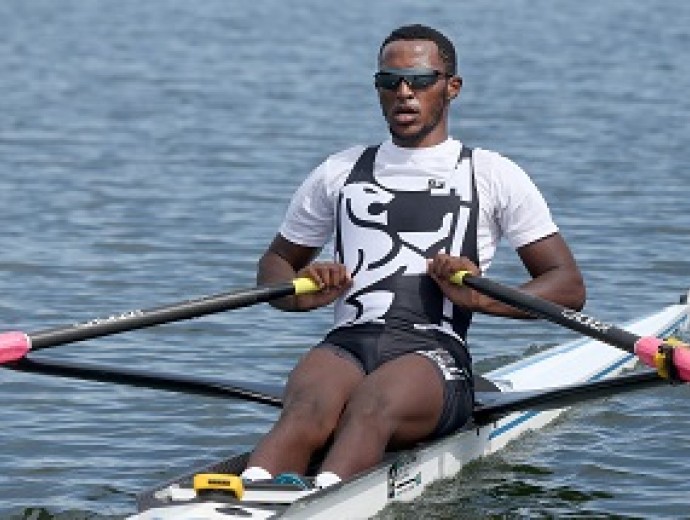