Pangolins have existed for more than 40 million years. Covered from head to toe in scales, they are certainly not your typical furry and fluffy mammal. On closer inspection of their precious little faces, one can begin to imagine that this mammal is not too far removed from the domestic dog. In fact, pangolins are genetically much more closely related to dogs than to other ant-eating animals, such as aardvarks.

Their numbers are rapidly declining because of people’s ignorance regarding pangolins’ scales and body parts. In parts of Asia and Africa, it is believed that their body parts have medicinal properties and that their scales have healing powers. These beliefs are just as ridiculous as those regarding rhino horn. Pangolins’ scales are made of keratin, so people would save a lot of money for the same effect if they ate their own nails. As if ignorance were not enough, man’s stomach and greed are also leading to the extinction of this species. Across Asia, pangolin meat is considered a delicacy and is sold in top restaurants at exorbitant prices.

Population trends, as indicated by the International Union for Conservation of Nature (IUCN) Red List of Threatened Species, indicate that all eight species in Africa and Asia are on the decrease, all bearing statuses ranging from vulnerable to critically endangered. The pangolin’s time is running out and very little is known about the animal.

Dr Christine Steyn, of the Department of Anatomy and Physiology in the Faculty of Veterinary Science, is one of the few people doing research on the anatomy of this shy animal. As a veterinarian, Steyn believes it is her duty not only to care for sick animals, but also to find out as much as possible about endangered animals in order to protect them.

Studying pangolins poses challenges. Because of their scarcity, finding specimens is not always possible. Sadly, all of Steyn’s specimens died from causes related to the encroachment of humans into their habitat, such as electrocution. While this saddens her, it is a comfort that, through her research, the pangolin’s death may mean something.

South Africa is home to only one kind of pangolin, the African Ground Pangolin (Smutsia temmincki). What makes this species so unique is that, having very short forearms, it only walks on its hind legs. Its long tail aids with balance and its forearms are used to dig for food – a diet of ants and termites.

While it is still true that very little is known about the anatomy of any of the species, Steyn’s research is sure to serve as a thorough grounding for further studies on the ground pangolin and the other species. Her research includes in-depth study of the thoracic or front limb of this unique pangolin, as well as its locomotive system. This includes thorough examination of the bones and muscles used during movement. From her initial analysis, Steyn has found that some muscles are much more developed than the corresponding muscles in dogs, and that they are pronation animals, meaning they are able to perform a rotational movement where the hand and upper arm can turn inwards.

When threatened, pangolins have the incredible ability to roll their scaled bodies into tight balls, protecting their soft abdomens from predators. Pangolins to do this instinctively.

One of the main causes of death for pangolins in South Africa is electrocution. Their natural habitats have become populated with game farms which are surrounded by electric fences. Although these fences are not erected to keep pangolins out (as they are not so-called ‘pest’ animals) the bottom wire is usually at a height that it touches the pangolins as they walk past. When a pangolin receives the initial shock, its instinctive reaction is to roll into a ball rather than to run away. It therefore remains in contact with the live wire and eventually dies from electrocution.

Land development is also encroaching on their natural habitat. Steyn says that ‘numbers are decreasing because of electrocution and deforestation and while the focus is not on them at all, pangolins are dying because of it. They are not supposed to be affected, but they are.’

Facilities such as the diagnostic imaging system at the Faculty’s veterinary hospital have made it possible for Steyn to learn much more about the insides of pangolins. In collaboration with the hospital’s Head of Diagnostic Imaging, Prof Robert Kirberger, Steyn is able to conduct computed tomography (CT) scans which provide three-dimensional X-ray ‘slices’ for in-depth radiographic diagnostics and imaging.

The advancements in animal medicine have enabled veterinarians and researchers to go beyond performing standard procedures on animals. For example, it is possible to perform an X-ray on a rolled up pangolin, but some structures will be difficult to see because of the thickness of the scales. A CT scan, however, is a valuable way of determining what exactly is going on inside a coiled up pangolin. This has enabled Steyn to understand a great deal more about their organs, osteology and muscular system. Using CT scans, it is also possible to determine the sex of an animal.

Apart from adding to the pool of knowledge in the conservational world, and giving practising veterinarians information on how to radiograph an injured pangolin and what structures to look out for, Steyn also hopes her research will spark interest in students and get them to consider studying less common species.

Dr Steyn is part of the African Pangolin Working Group and is adding to her veterinary qualifications by doing a MSc under the supervision of Dr Martina Crole in the Faculty’s Department of Anatomy and Physiology. 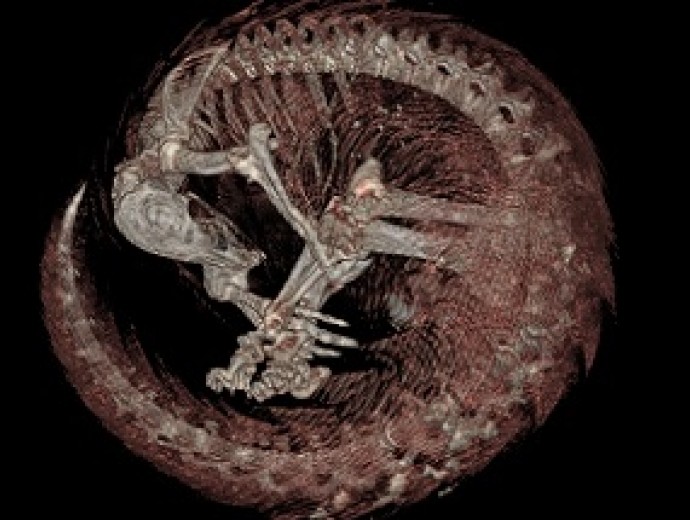