University of Pretoria (UP) Vice-Chancellor and Principal Professor Tawana Kupe will be awarded an Honorary Doctorate in the Humanities by Michigan State University (MSU) on 13 December.

He will also deliver a speech at the graduation ceremony where postgraduate degrees will be awarded. Announcing the accolade, MSU said Prof Kupe “is a scholar of media studies and journalism, having notable records in publication and activism. He has worked on several books outlining recommendations for public access to media across Africa. In addition, he is Chairperson of the board of Media Monitoring Africa, an entity dedicated to media accountability and promoting the role of the media as an institution integral to sustaining democracy.”

Furthermore, he is a leader in providing quality education to more than 53 000 students at UP. “Kupe previously served at the University of Witwatersrand as the executive dean of the Wits Faculty of Humanities. While there, he led several new initiatives, including the creation of the Media Studies Department and development of the Wits Arts and Literature Experience.”

Prof Kupe will be introduced by Stephen Hsu, Senior Vice-President for Research and Innovation. He will be hooded by Hsu and Interim Provost Teresa Sullivan. MSU President Samuel L Stanley, Jr, will read the citation as Prof Kupe is hooded and then award him the degree.

MSU is regarded as the USA’s pioneer land-grant university and is the first institute of higher learning to teach scientific agriculture.  It is a comprehensive university with more than 50 000 students; more than 10 000 enrolled for masters and PhD programmes; more than 20% students of colour, the majority of which are African or African-American. More than 13% of the total student population comprises international students.

MSU has a long history of international work, spanning more than 60 years of engagement on the continent, and is regarded as one of the US universities with the strongest footprint in Africa. It is constantly ranked in the top 100 universities globally; in the top 20 for agriculture, animal and plant sciences and ecology; and in the top 20 land-grant universities. MSU and UP have a history of partnership, including faculty and student exchanges. One focus has been agriculture and food security, with programmes such as the MSU-led Feed the Future USAID Innovation Lab for Food Security and the International Food Policy Research Institute. The MSU-UP collaboration has also included a focus on culture and language. In 2017, UP’s Department of African Languages hosted a group of MSU students led by MSU Professor Joy Coates on the study of South African languages and culture. In 2019, UP became the 10th member of the Alliance for African Partnership (AAP) and is the only South African member. The AAP promotes sustainable, effective and equitable long-term partnerships among African institutions, MSU and other international organisations.

The AAP was launched as a major MSU initiative in 2016 and evolved to become a consortium of 10 universities — MSU and nine African universities — in October 2018. UP was invited to join the AAP because of its leadership in research for impact on the African continent. Most recently, the collaboration between UP and MSU expanded through AAP programmes such as the African Futures Research Leadership Programme, a postdoctoral programme that targets early career female researchers from AAP consortium members to be jointly supervised by faculty members from MSU and their home institution. The fellows will also participate in a programme at UP’s Future Africa, whose Director, Professor Cheikh Mbow, serves as adjunct professor at MSU. They will receive training in the areas of thought leadership, team development, research development, engagement and collaboration, while building south-south collaboration with other African researchers.

Prof Kupe said, “I am deeply honoured to be recognised by Michigan State University for my work on the media across Africa, media activism and innovative university leadership.”

Referring to UP’s partnership with MSU in the area of food security, Prof Kupe said UP has a strong focus on sustainable agriculture and food. “Furthermore, our Faculty of Veterinary Science is a driver of food production, because South Africa is food insecure and we need to make farms productive.”

To help improve animal production and achieve food security, the University is strategically targeting the recruitment of students from rural areas so that they can go back home and work with farmers in their communities. 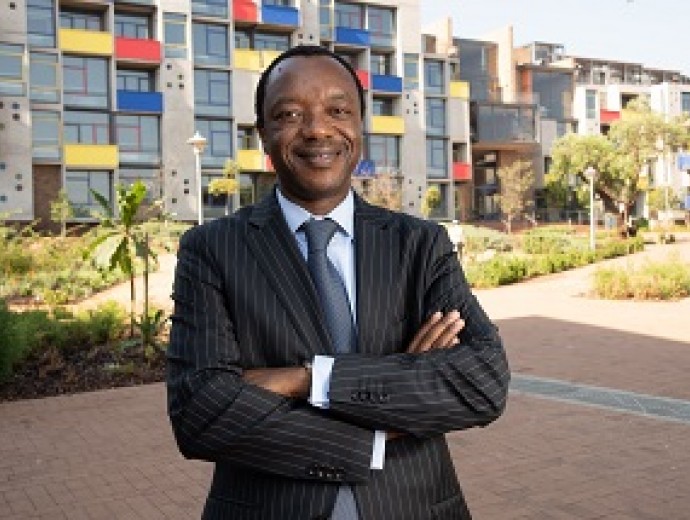