As a founder member of the International Society for the Study of Chinese Overseas (ISSCO), Prof Karen Harris attended its 30-year anniversary conference this month in San Francisco.

At a plenary session she and fellow founder members from the USA, the Philippines and France were asked to reflect on their journey of the past three decades and consider the impact of their research in the field of overseas Chinese studies.

As one of the first South African academics on the African continent to focus on overseas Chinese studies, Prof Harris recalled how at the time of her embarking on this topic it was both questioned and considered very unconventional, if not controversial. Regardless, she pursued her interest and completed her PhD on the topic: “A history of the Chinese in South Africa to 1912”.

While doing research in the archives of the Public Record Office in Hong Kong in 1992, she was invited to meet with Prof Wang Gungwu, then Vice Chancellor of Hong Kong University and the leading academic in the emerging field of overseas Chinese studies. He requested her to join the upcoming inception conference, which was being hosted by the University of California, Berkeley scheduled to be held in the Miyako Hotel in San Francisco in November of that year.

Entitled “LuoDi-ShengGen: The legal, political and economic status of Chinese in the diaspora” the conference drew scholars from across the globe including the People’s Republic of China, Taiwan, Europe, Oceania as well as both Americas. The conference led to the establishment of ISSCO with Harris as the African representative on the Board, a position she has continually been re-elected to over the past thirty years.

The network of scholars and the shared interest in her work on the overseas Chinese resulted in multiple articles and book chapters in a range of international publications which were both single-authored or done in collaboration with academics from ISSCO presenting, amongst others, comparative perspectives.
In her reflections at the 2022 conference, Prof Harris indicated how the research on the Chinese in Africa had grown exponentially across disciplines and the continent and how she continues to be invited to address the topic of Chinese in Africa.

At the ISSCO conference, she also shared how her own research along with her involvement with ISSCO had indirectly resulted in two major milestone court case decisions in South Africa. The one was the Broad Based Black Economic Empowerment court case where the South African Chinese were eventually recognized as being previously disadvantaged, and categorized as “black” under the legislation in 2008; while the other was the Hate Speech case which was won in favour of the South African Chinese in 2022.
According to Harris, “both these cases can be regarded as beacons of hope for overseas Chinese across the globe, particularly at the present moment when Anti-Asian sentiments have emerged in parts of the world”.

Prof Harris concluded that “it had been an honour to have worked with international scholars in the field as well as the local South African Chinese community” indicating that it had enriched her life.

The Department of Historical and Heritage Studies would like to celebrate the achievements of Prof Harris in the field of Chinese studies and this important milestone of thirty years of the ISSCO. 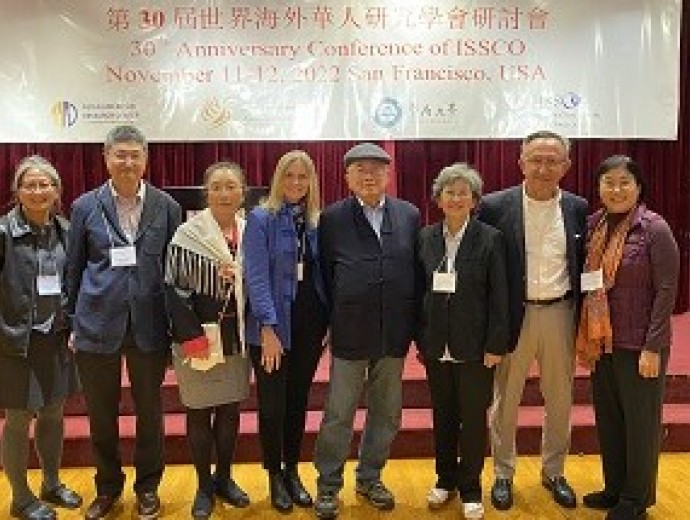