In part to mark the 30th anniversary of the establishment of the liberation movement archives at the University of Fort Hare’s National Heritage and Cultural Studies centre (NAHECS), the University of Fort Hare’s Department of History and NAHECS hosted the 28th Biennial Conference of the Southern African Historical Society (SAHS) at the Regent Hotel Conference Centre in East London.

As part of my induction into the discipline, I was privileged to present a paper at the conference alongside my supervisor and Head of Department, Prof Karen Harris and her colleagues Prof Tinashe Nyamunda and Dr Ian Macqueen, postdoctoral fellow Dr Brooks Marmon, as well as master’s student Lisa McDermid.

Notwithstanding the level 6 load shedding status during the conference, delegates and attendees seemed buoyed by the society’s first face-to-face proceedings since the advent of the Covid-19 pandemic and its disruption of life as we knew it. Given the further relaxation of the Covid-19 restrictions, attendees assailed the load shedding disruptions with indefatigably bright smiles and great camaraderie. Everyone seemed genuinely pleased to see each other and I felt welcomed into the discipline by enthusiastic scholars who seemed more interested in what I thought and had to say than I ever expected.

In many ways, which included the fact that I was born, raised, arrested, tortured, and exiled from East London in the mid-1980s, I had found my tribe and the entire conference felt like a kind of homecoming or family reunion more than anything else. However, and not withstanding these sentimental overtones, the conference was a serious marker of the development of scholarship not just in terms of the multitude and range of sessions on the programme, which made choosing which session to attend and which to skip a rather daunting exercise in and of itself. The sessions, running parallel during the three days, offered a Smorgasbord of delicious pickings hard to pass up even for those scholars with “a ruthless fidelity” to their sliver of specialisation in the discipline.

As my inaugural conference in the discipline, I was both overwhelmed and enthused by the supportive, caring, encouraging, and challenging atmosphere, disposition and attitude of the great and accomplished scholars at the conference to the young, feisty, sometimes shy yet boundary-expanding new and emerging scholars from institutions across the region.

The conference also launched two publications: Bloody Sunday: The Nun, the Defiance Campaign and South Africa’s secret massacre by Mignonne Breier (Tafelberg, 2021) and Archives of times past: Conversations about South Africa’s deep history edited by Cynthia Kros, John Wright, Mbongiseni Buthelezi, and Helen Ludlow (Wits University Press, 2022). I was honoured to be invited to serve as a discussant at the launch of Breier’s Bloody Sunday, which is about the death of Catholic Nun Sister Aiden and the largest massacre in South African history which took place in Duncan Village in East London in November 1952 but has been hidden from mainstream South African history, a condition Breier sought to remedy.

I was also honoured to introduce Dr Mosoabuli “Ike” Maamoe, who was retiring as the Senior Archivist at SAHEC after 30 years of service to the South African Liberation Movement Archives. Dr Maamoe or Bra Ike as we call him, is, like myself, a SOMAFCO graduate. As a custodian of our heritage, Bra Ike was also responsible for organising the SOMAFCO archives and bringing them to the University of Fort Hare 30 years ago when SOMAFCO was closed and exiles were allowed to return home again. His story is fundamental to the establishment of the liberation movement archives at the University of Fort Hare.

On the last day of the conference, the Society convened its business meeting where, among other things, the state of the National Archive, a concerned registered by Prof Harris, was also discussed. Through a voice note contribution by Prof Harris, which in her absence was played for the members, the concern regarding the state of the archive and the important and critical role of the historians’s associations in dealing with the issue were raised. Consequently, the Society members agreed to form a committee or team to deal with archives as a direct concern.

At the closing session, Prof Neil Roos, the recently installed Dean of Social Sciences and Humanities at the University of Fort Hare, reflected on the long and wonderful road the discipline and the Society has travelled in the last 20 years. In his closing remarks, Roos noted that the Society and the discipline were in a good place and in good hands given the “energetic remaking of the discipline” that he was witnessing, which was the nature and tone of my experience of the Southern African Historical Society and the scholarship shared at the event.

Finally, South African scholastic luminaries such as Xolela Mangcu, William Beinart, Paul Maylam, Alan Mabin, Cynthia Kros, Caroline Hamilton, Noor Nieftagodien, Sifiso Ndlovu and Howard Phillips, to name but a few, graced the occasion and provided testimony to the durability and vitality of the discipline in the country and region alongside other international scholars who participated in the conference in person and online.

I imagine the University of Pretoria’ Department of Historical and Heritage Studies is going to dispatch an even greater number of history students to the next Historical Association of South Africa conference to be held in Grahamstown in 2023 and the following Society conference which will be held at the University of Johannesburg in 2024. 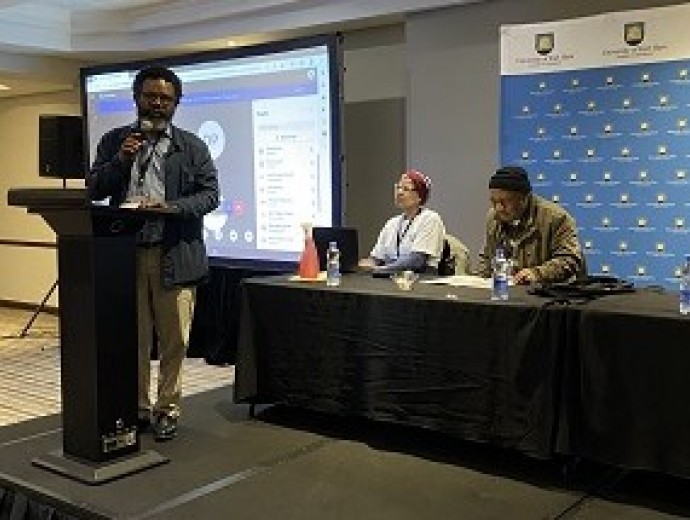