My children, you are permitted in time of great danger to walk with the Devil until you have crossed the bridge

On the 19th February 2020, the Department of Historical and Heritage Studies hosted a seminar entitled “My children, you are permitted in time of great danger to walk with the Devil until you have crossed the bridge: President Truman, apartheid and the early Cold War" presented by Dr. Eddie Michel. During his talk, Dr. Michel discussed the strategic anti-communist alliance between South Africa and the United States (US), an alliance that grew despite the two country’s opposite racial and civil rights policies.

In the US, the election of President Harry Truman signified a move away from racial segregation towards ensuring greater civil rights for Afro-Americans. President Truman was determined to end racial segregation and passed a series of executive orders to further civil rights for all Americans. Notably, Truman desegregated the US Army, prohibited racial discrimination in the civil service, and enforced a federal ban on lynching.

In direct contrast, 1948 also witnessed the election of President Daniel François Malan and the accession to power for hard-line nationalists in South Africa. After Malan’s election, the National Party started to institutionalise racial segregation through a series of infamous laws including: the Prohibition of Mixed Marriages Act (1949), the Immorality Amendment Act (1950), the Population Registration Act (1950) and the Group Areas Act (1950).

Yet, despite their radically different approach to civil rights and race relations, the US and South Africa entered in an unlikely alliance.

For Dr. Michel, this strong cooperation between the US and South Africa must be put into the context of the Cold War. Indeed, President Truman,  through the Truman Doctrine, is also remembered for his vehement opposition to communism, which was aimed at countering communist geopolitical expansion and implied American support for all nations threatened by Soviet communism. The Doctrine underpinned American foreign policy throughout the Cold War with the containment of Soviet expansion becoming fundamental to the US’s national interest. Similarly, South Africa’s National Party adopted a strong anti-communist stance. In 1950, the National Party introduced the Suppression of Communism Act, effectively banning all parties subscribing to Communism. The Act also sought to suppress resistance to apartheid and banned opposition gathering. Their common aversion towards Communism drew the two governments into an incongruous anti-Soviet alliance.

According to Dr. Michel, natural resources played a critical role in the rapprochement between Pretoria and Washington. Indeed, Washington eyed with envy South Africa’s rich reserves of iron ore, platinum, manganese, chromium, copper, uranium, silver, beryllium, and titanium. Moreover, the Soviet’s first successful nuclear device test in 1949 propelled the two superpowers in an arms race for nuclear supremacy. In 1949, the two countries strengthen their diplomatic ties with the elevation of South African and US legations to embassy status. At the time, the US primary source of uranium was the Belgian Congo but the need to diversify uranium sources highlighted South Africa’s strategic importance. South Africa’s vast uranium reserves had the potential to become a premium long-term source for the US. Another point of interest for the Americans was South Africa’s strategic geographic importance - South Africa was seen as the only country on the African continent capable of containing ‘soviet aggression’ and capable of defending the continent against the communist threat. Moreover, South Africa’s geographic position at the tip of Africa meant that the country was able to control an important alternative trade route to the Mediterranean.

The National Party was quick to realise that it could use South Africa’s natural resources as leverage to foster a strong alliance with the United States. At the time, South Africa was more important to the US national interest than the US was to South Africa, and this allowed the National Party to stay intransigent to the American call to reverse their segregation policies. In return for a steady supply of uranium at a fixed price, South Africa benefitted, among others, from massive investment in the mining industry, a military alliance and access American weaponry. Moreover, the National Party framed all domestic unrest as 'communist agitation' to contain American criticism against the repressive apartheid laws.

This short overview of the American-South African cooperation during the Cold war highlighted the centrality of national interest in the bilateral relations between the two countries. The fear of the communist threat set US demands for improved civil rights aside until the 1986 Comprehensive Anti-Apartheid Act, which imposed sanctions on the apartheid South African government. 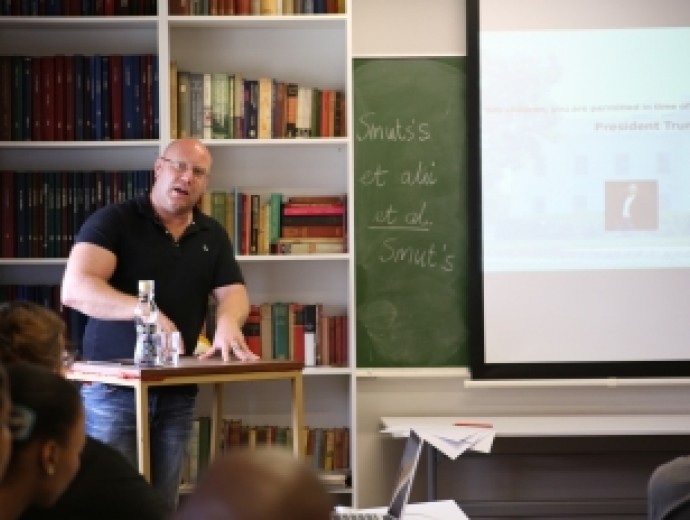