Drs Boonzaaier and Makhoba received their PhD degree at the Graduation Ceremony held on 11 April 2019.

The Chair of the GSTM, Prof Elma van der Lingen would like to congratulate Drs Johann H Boonzaaier and Xolani Makhoba for obtaining their PhD degrees.

Summary: Through his research, The South African polycentric water resource governance-management nexus: Parlaying an institutional agent and structured social engagement, the promovendus developed a polycentric multiple stakeholder engagement model, facilitated by an institutional agent, to address a critical void in the legislated South African natural water resource governance and management institutional framework. Structured collaborative engagement was utilised through a transdisciplinary process of knowledge and solution synthesis. The process resulted in a bifurcating and fusing governance and management nexus of interpretation, information and guidance between the stakeholders. The application of this model provided a basis and capacity for existing institutional agents to facilitate the protection of the resilience of freshwater resources, and thereby ensure sustainable water security in South African river basins.

Title: Scientometric assessment of R&D priority areas in South Africa: a comparison with other BRICS countries

Summary: In his thesis, Scientometric assessment of R&D priority areas in South Africa: a comparison with other BRICS countries, the promovendus studied the priority areas of South African in terms of technology development and its impact. The bibliometrics and patent data was collected from established databases and was used to evaluate the outputs in South Africa’s major R&D priority areas using appropriate scientometrics indicators related to specialisation. The performance was compared to that of the other BRICS (Brazil, Russia, India, China and South Africa) countries and Egypt. In addition, this study also considered the R&D efficiency for the conversion of the inputs as measured overall investment in R&D to outputs as measured by patents and publications. 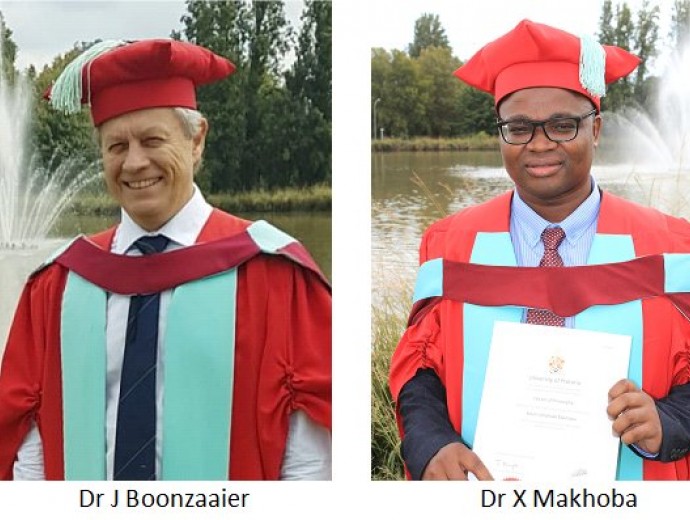