The science behind hail

As South Africa lives through one of its hottest and driest summers in years people are scanning the heavens for harbingers of rain. And as we saw again on 16 November last year, thunderstorms can come up suddenly and cause havoc. Large swaths of the northern parts of the country were subjected to severe hailstorms on that day and hailstones the size of tennis balls inflicted massive damage in Limpopo.

Dr Liesl Dyson of UP’s Department of Geography, Geoinformatics and Metereology went on record, however, to the effect that hailstones of unprecedented size are not necessarily explained by heat or drought.

“The truth is that surface temperatures have to be high to form a substantive condition for the occurrence of hail, but surface moisture is a further requirement.”

Dr Dyson says hail mainly occurs in the summer-rainfall regions of South Africa, usually early in the season from October to December. “The atmosphere turns more tropical later in the season, and although good rains might still fall the chances of hail will be minimal.”

Air cools as it rises, and the low-pressure system where hail is formed is called the freeze zone because the temperature at this level is below freezing. The altitude of this freeze zone must be fairly close to the earth’s surface for hail to form.

Another condition that favours hail formation is collision between hot air rising from the earth’s surface and the resultant flow of cold air flowing across the land from the sea. “Heavy thunderstorms that may be accompanied by hail will tend to develop along the line where warmer and cooler airflows meet.”

Air heated by the hot surface of the earth will begin to rise, causing strong updraughts. During a thunderstorm air bubbles containing moisture will be borne further upwards where the cooler air will cause condensation and the moisture in the ‘air pocket’ will change phase and become water. When the condensate moves through the freeze zone it will freeze.

Dr Dyson explains that rising and falling in this manner may contiunue for some time. The ice particles formed at higher altitudes will impact others and form clusters that will gradually overcome the force of the updraught and then fall to earth as hail.

“Frequently the ice particle melts as it leaves the cloud and enters the warm atmosphere, in which case it merely precipitates as rain. So, if you come across a hailstone the size of a tennis ball on earth it must have been quite a whopper when it came down from the cloud.”

Dr Dyson says there aren’t many signs that a hailstorm is on its way, although mammatocumulus clouds (see photo) could be an indication of a severe hailstorm in the offing. It may also be advisable, therefore, to heed warnings from the Weather Service.

Dr Dyson classifies a thunderstorm as a relatively minor weather phenomenon, a large one being approximately 5 km across, compared to a tropical cyclone, which can measure thousands of kilometres across.

Dr Dyson warns, however, that any thunderstorm is potentially dangerous because of attendant phenomena such as hail, lightning, heavy rainfall and winds gusting at gale force.

Statistically lightning strikes claim between 1,5 and 8,8 deaths per million of the world’s population each year. The toll is higher in South Africa, and especially in the eastern Highveld where air pollution could be a possible cause of the higher incidence of lightning strikes. People should therefore seek shelter when lightning strikes are in evidence. 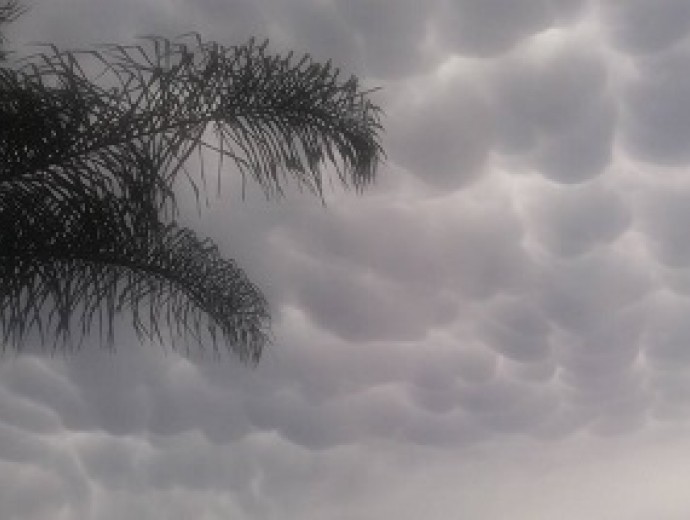 Mammatocumulus clouds are often noticed during a thunderstorm and could indicate a possible hailstorm. Photo: Jean du Preez