During a recent combined meeting of the African Association of Physiological Sciences (AAPS) and the Physiological Society of Southern Africa (PSSA), PhD student Felicia Azubuike, from the Centre for Neuroendocrinology (CNE) at the University of Pretoria won the PSSA's Wyndham Prize.

The prize is named in honour of the late Professor Cyril Wyndham. It is presented to a young researcher for best oral presentation in Physiological Sciences. This year's winner Felicia Azubuike will receive funding to attend the International Union of Physiological Sciences (IUPS) Congress in Beijing in 2022.

"I am pleased to have won the Wyndham prize. I hope that my work with my supervisor Dr Van den Bout will lead to an understanding of the mechanism through which kisspeptin influences breast cancer metastasis."-shared Felicia Azubuike.

Felicia and her supervisor, Dr Iman van den Bout are currently investigating the signalling pathways in breast cancer cells directed by the receptor for the neuropeptide, kisspeptin. Felicia's work has already shown that different breast cancer cells respond in unique ways to kisspeptin by either turning on pro-growth signals or by stimulating cancer cell movement, which is a prerequisite for cancer metastasis. This project is pursued to determine if modulation of this receptor could be used to prevent metastasis in some patients with breast cancer.

Dr Iman van den Bout, Senior Lecturer at the Department of Physiology and Principal Investigator at the Centre for Neuroendocrinology at the University of Pretoria, is proud of Felicia's work. And that her winning the PSSA's Wyndham Prize is confirmation of the excellence of her work and the recognition of her potential as a future research leader. "Felicia's project is shedding light on the role of neuropeptide receptors such as KISS1R on the progression of breast cancer and the inherent variability found within this cancer type", shared Dr Iman van den Bout. 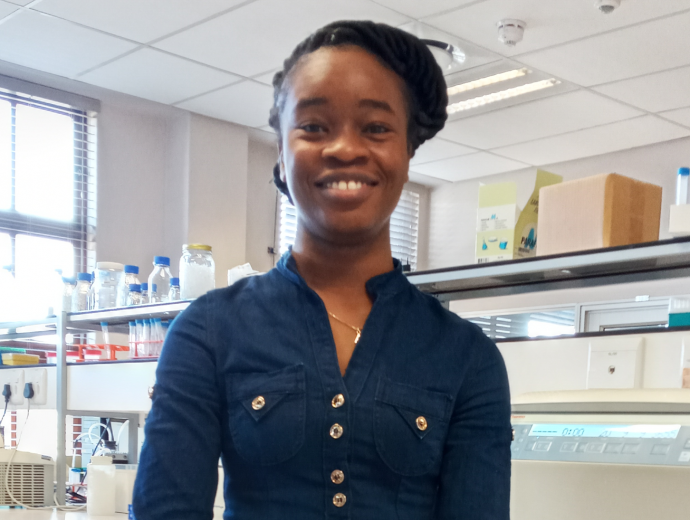