With the Rugby World cup now in full swing, sports injuries have once again received a lot of attention in the media. Apart from the anxiety that these injuries are causing supporters in the grip of rugby fever, sports injuries pose a very real risk to the health of the athletes involved and could be devastating in terms of their future career prospects.

The University of Pretoria (UP)’s Section Sports Medicine was created in 1999 and has since established itself as a leader where research related to overtraining and heart-rate variability is concerned. Another research focus area in which the Section is currently very active is injury surveillance, which is a field of sports medicine that is increasingly being recognised as an important requirement by professional sporting bodies.

According to staff at the Section, successful injury surveillance could motivate sporting bodies to consider and implement rule changes to improve player safety. Of course, the biggest challenge with injury surveillance is to reduce injury rates among athletes to the lowest possible level without discouraging young people from engaging in the sport. In reality, sports-related injuries are largely avoidable through the execution of preventive interventions based on the outcomes of scientific research. In order to assess the extent of the sports injury problem however, it is necessary to identify both the incidence and severity of sports injuries. This goal can best be accomplished by reporting epidemiologic findings responsibly, investigating the aetiology of injuries and by developing, implementing, and evaluating protective interventions using such research and evidence.

To this end a group of researchers from the Section (Prof DC Janse van Rensburg, Dr O Strauss, Dr MD Velleman, Ms A Jansen van Rensburg and Dr CC Grant) described the case of a 22-year-old rugby player who presented with iliopsoas muscle haematoma three days after being tackled in a rugby match in August 2013. Their article titled, ‘Iliopsoas haematoma in a rugby player’, was published in the South African Journal of Sports Medicine earlier this year.

Classified as either spontaneous or traumatic, iliopsoas muscle haematomas are rare lesions that typically appear in individuals presenting with clotting difficulties, whether owing to illnesses, such as haemophilia and other blood disorders, or as a result of anticoagulant treatment. Traumatic iliopsoas haematoma is a serious complication of haemorrhagic disorders rarely seen in young healthy athletes. The iliopsoas comprises three muscles passing through the pelvis. The origins are on the lumbar vertebrae (psoas major and psoas minor muscles) and the inner pelvis (iliacus muscle) and the muscle inserts in the lesser trochanter on the femur. It is the strongest flexor of the hip joint, and with minimal elastic properties, opposes extension of the hip. These muscles are essential in the support of posture and hip flexion. They work together to flex the hip when kicking, bringing the leg out in front of the body or the knee up towards the chest when running.

According to the article, the 22-year-old rugby player incurred the injury during the first half of the match when he was tackled and twisted his pelvic area, damaging his hip. He only left the field during the second half complaining of lower back pain. During an examination directly after the game, he had no pain and full strength with flexion of the right iliopsoas and rectus femoris muscles and no pain on adduction of the right leg. The lower back was pain free with a normal range of motion of the vertebral column. No immediate treatment was given, as his symptoms had subsided.

It was only three days after the game that he complained of excessive pain in the lower back, right hip flexor/pelvic area. On re-examination he presented with pain on palpation of the right hip flexor muscles. There was no pain during resistant flexion movements of both the deep and superficial hip flexor muscles. The lower back area was still pain free on palpation, but he had some pain with flexion of the vertebral column. He had no pain with the adductor squeeze test or when doing a sit-up. He also had no pain on adduction or abduction of his right leg. The FABER (flexion, abduction, and external rotation) test of the right hip was negative. It is usually performed to evaluate pathology of the hip joint or the sacroiliac joint. The test is performed by having the tested leg flexed, abducted, and externally rotated.

A possible deep hip flexor muscle strain or lower back injury was suspected. The player was referred for a magnetic resonance imaging (MRI) scan of the lower back and pelvic area. The MRI lumbar spine scan revealed oedema in the right psoas muscle, extending from L1 to L5. Centrally in this region of oedema, a more complex area of heterogeneous signal changes of approx 3 to 5 cm in diameter was noted, which is consistent with sub-acute haematoma. The MRI identified a distinct, hyperechoic heterogeneous mass within the right iliopsoas muscle, confirming a diagnosis of iliopsoas haematoma.

Treatment consisted of rest from all rugby and conditioning activities for 14 days. The player also received symptomatic physiotherapy treatment comprising anti-inflammatory modalities and soft tissue mobilisation of muscle around the right hip flexor muscle area. A ten-day course of oral analgesic tablets was prescribed. The patient was pain free on walking and resistant hip flexor muscle movements after 14 days. He had normal range of motion of the right hip. A gradual running programme was introduced together with resistance training. Sport specific conditioning commenced after 21 days, and after 28 days he was asymptomatic and returned to full rugby training.

The team’s study of, and active involvement with this specific case, will hopefully prove instrumental in the treatment and/or prevention of similar incidences of this condition in other athletes in the future. 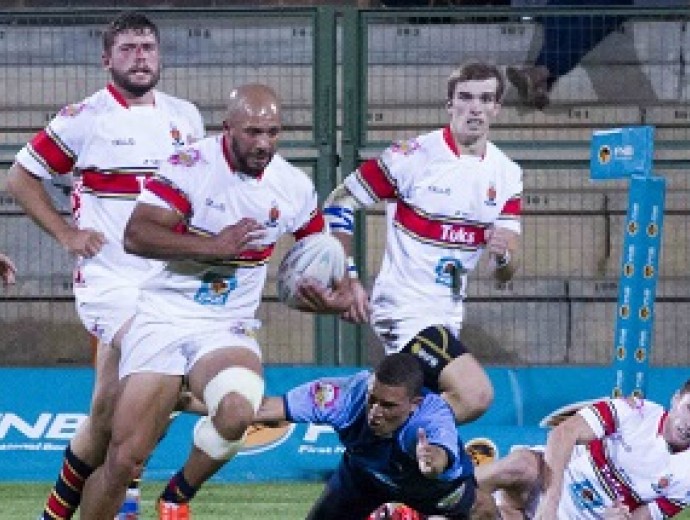