He has been a world leader in statistical science for the last seven decades. His research, scholarship and professional services have had a profound influence on the theory and applications of statistics. Technical terms such as Cramer-Rao inequality, Rao-Blackwellization, Rao’s score test, Fisher-Rao theorem, and Rao distance and orthogonal arrays (which are used extensively in industry) appear in all standard books on statistics. The results associated with these terms have been extensively used in engineering and other disciplines. Two of his papers appeared in Breakthroughs in Statistics in the last century.

Rao was awarded an MA degree in mathematics by Andhra University and an MA degree in statistics by Calcutta University before he began doing research at the Indian Statistical Institute (ISI), one of the leading institutes in the world. He was later invited to work on a project at Cambridge University that required the statistical methodology he had developed at the ISI. Based on the work he did, Prof Rao earned PhD and ScD degrees from Cambridge University. To date, he has received 38 honorary doctorates from universities in 18 countries on six continents around the world. He held several important positions, as the Director of the ISI, Jawaharlal Nehru Professor and National Professor of India, University Professor at the University of Pittsburgh, and Eberly Professor of Statistics at Pennsylvania State University.

As Head and later Director of the Research and Training School at the ISI for over 40 years, Prof Rao developed research and training programmes and produced outstanding students which ‘put India not far from the centre of the statistical map of the world’. During this period, he also directed the training programmes at the International Statistical Educational Centre which led to the development of statistics in the Southeast Asian region, for which he received the prestigious Mahalanobis Award from the International Statistical Institute.

Prof Rao was honoured by the president of the USA with the prestigious National Medal of Science with the citation, ‘for his pioneering contributions to the foundations of statistical theory and multivariate statistical methodology and their applications, enriching the physical-biological, mathematical, economic and engineering sciences’.

The Government of India honoured him with the second-highest civilian award, the Padma Vibhushan (the highest is the Bharat Ratna, of which Dr Nelson Mandela was a recipient), for ‘outstanding contributions to science and engineering/statistics’, and also instituted a cash award in his honour, ‘to be given once in two years to a young statistician for work done during the preceding three years in any field of statistics’.

In 2001, the University of Cyprus honoured Dr Nelson Mandela and Prof CR Rao with honorary doctorate degrees on the same platform. Dr Mandela remarked on the occasion, ‘now I realized, if I want to be fit, I must do statistics half an hour every day’.

Karl Pearson’s famous chi-square paper appeared in the spring of 1900, an auspicious beginning to a wonderful century for the field of statistics. The first half of the century was the golden age of statistical theory, during which our field grew from ad hoc origins, similar to the current state of computer science, into a firmly grounded mathematical science. Men of the intellectual caliber of Fisher, Neyman, Pearson, Hotelling, Wald, Cramer and Rao were needed to bring statistical theory to maturity.

CR Rao would be found in almost any statistician’s list of the five outstanding workers in the world of Mathematical Statistics today. His book represents a comprehensive account of the main body of results that comprise modern statistics theory.

Dr Rao is a very distinguished scientist and highly eminent statistician of our time. His contributions to statistical theory and applications are well known, and many of his results, which bear his name, are included in the curriculum of courses on statistics at bachelor’s and master’s levels all over the world. He is an inspiring teacher and has guided the research work of numerous students in all areas of statistics. His early work had greatly influenced the course of statistical research during the last four decades. One of the purposes of this special issue is to recognize Dr Rao’s own contributions to econometrics and acknowledge his major role in the development of econometric research in India.

CR Rao is unquestionably one of the architects of ‘Modern Characterization Theory’. His pioneering research and inspirational leadership have had a major influence on the developments in the area. Indeed largely due to the efforts of the people like CR Rao, the area has now acquired a healthy status of being one of the most active and important research areas … CR Rao’s work in characterization theory has led to several keywords in the area, associated with his name.

S Karlin, a mathematician who won the President’s medal:

CR Rao is among the worldwide leaders in statistical science over the last five decades. His research, scholarship, and professional service has had a profound influence on the theory and applications of statistics and is incorporated into standard references for statistical study and practice.

CR Rao is not only a highly creative theoretician but was attracted and labored with many data sets in health, biology, psychology and social sciences.

Dr Rao is a great scholar beyond the framework of statistics, which he himself has founded. It is a big surprise that his influence has been effective and has played a great role for more than half a century to produce fruitful developments in several scientific disciplines.

As the world’s leading expert in statistical design theory

The government has appointed CR Rao, an eminent statistician, as National Professor, Professor Rao is an outstanding and creative thinker in the field. He was appointed by Professor Mahalanobis as a full-fledged professor of the Indian Statistical Institute at the early age of 29 in recognition of his creativity. Dr Rao succeeded him as Secretary of the Institute and later its Director.

Prof Yadavalli, the Head of the Department of Industrial and Systems Engineering in the Faculty of Engineering, Built Environment and Information Technology at the University of Pretoria comments: ‘Among the international community of scholars, you are widely acknowledged as one of the world’s foremost statisticians. In the complex realms of statistics and higher mathematics, your research and scholarly writing have opened new doors of understanding. The statistical theories and applications which bear your name attest to the fundamental contributions you have made to your field and to the larger body of humanity’s knowledge. Numerous honours and awards have followed in tribute to an unusually distinguished and productive life of inquiry. You have earned the highest accolade of all, the esteem of your peers throughout the world of scholarship.’

On the occasion of Prof Rao’s 100th birthday, the University of Pretoria wishes him a happy birthday 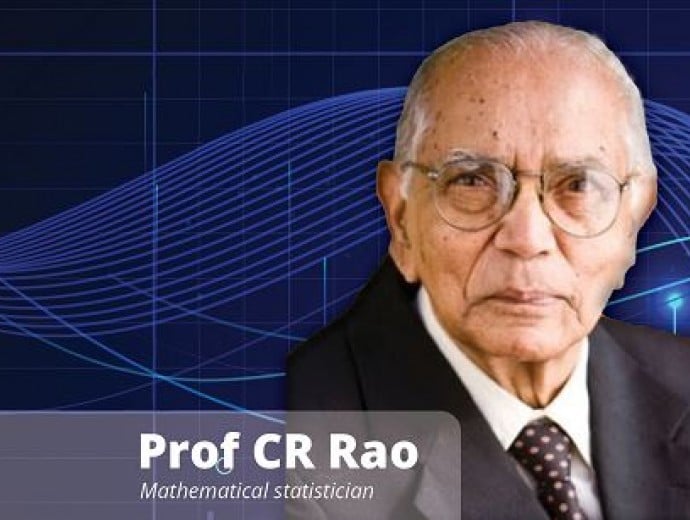