Getting to ski down a 2860 metre slope at speed when competing in a slalom race is as close as it gets to the ultimate adrenaline rush.

A mere lapse of concentration could lead to one breaking any bone in one's body, but it also can be addicting. According to the 20-year-old Tuks industrial engineering and systems student, Elizabeth Olivier, no race ever plays out the same. That is why, after more than ten years of slalom skiing, she still gets a real sense of achievement every time she finishes a competition unscathed.

The past weekend at the Tiffindell Ski-resort Olivier achieved a unique double when she won the South African senior and junior women's slalom ski-titles for a second consecutive year.

The Tuks student impressed with the way she mastered the art of skiing.  She managed to ski down the resort's steepest slope on four occasions. It is a feat quite a few of the male skiers who competed during the international competition battled to do.

A slalom course consists of a series of alternating pairs of blue and red gates. The number of gates used for a women's race is between 40 to 60. They are set in different types of configurations to make the run more challenging. For the men's course, the vertical drop is between 180-220m. It is slightly lower for the women's course. If you overshoot any one gate, you are disqualified.  The skier with fastest combined time on the two runs wins.

Olivier emphasised that utter focus is of cardinal importance when competing.

"You only get one opportunity to get a feel for the course. It is essential to make the most of it. I try and memorise as much as I can to be slightly prepared when I come down at speed into the corners. There is never any margin for error.

"The reality is that if you do make a mistake, there is a real chance that there could be dire consecquences. Up to now, I have been lucky. The worst that ever happened to me was when I took a tumble at speed. My chin had to be stitched up afterwards. A friend of mine, however, was not so lucky. She broke her shoulder bone. My brother once tore his knee ligaments."

It is not just the thrills and spills of slalom skiing that got Olivier hooked.

"I have been lucky to ski internationally. It brought about some of the most amazing memories. There were times when I was alone on my skis at places where few other people ever get to go. That is when you truly feel alive. You can't help but try and savour every moment because you don't know if you will experience something like it ever again."

Not skiing was never really an option for Olivier as she grew up in Barkley East. Her mother is quite involved with skiing development.  So it stands to reason that she would take up the challenge.

Definite highlights for the Tuks student were representing South Africa in 2016 at the Youth Olympic Games and in 2017 at the World Championships. 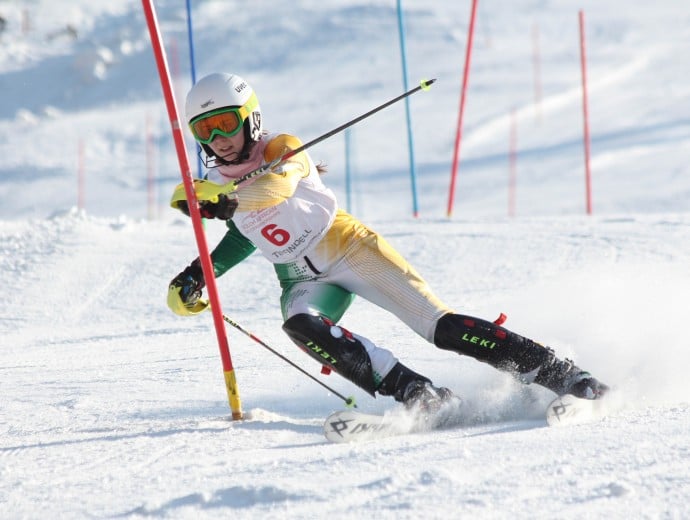