Akani Simbine, 2016 Rio Olympics finalist in the 100 metres, South African record holder in the 100 metres sprint, and Diamond League gold medallist, graduated at the University of Pretoria (UP) with a Bachelor of Information Science on Friday, 8 September.

The proud Tuks alumnus describes his experience at the University of Pretoria as follows: 'Amazing! The facilities and support from UP has been great and equipped me to study and progress as an athlete at the same time. Completing this degree has allowed me to learn a lot and grow as a person. It's provided me with a pathway outside of the sports arena and this is something that I encourage all professional sportspeople to consider. I have gained a qualification that no one can take away from me.'

Simbine obtained a scholarship from UP after his first year and was later assisted by the South African Sports Confederation and Olympic Committee (SASCOC). Surprisingly, his academic journey has also enabled him to improve his performance on the track.

'My degree in the IT field has taught me that due to this field constantly being in a state of change and advancement, one has to be open to change, be prepared to grow and be in the loop of these new developments – in order to be on the top of your game. This mindset I have carried over and adopted to my athletics, to be prepared and open to new ways and avenues to improving my performance.'

Simbine is grateful to his parents for being great role models. His gratitude also extends to the Dean of the Faculty of Engineering, Built Environment and Information Technology (EBIT), Prof Sunil Maharaj and to the Dean of the Faculty of Economic and Management Sciences, Prof Elsabe Loots, for accommodating his demanding athletics program in order for him to successfully complete his degree. His lecturer, Herman Lemmer, went the extra mile in supporting him with his Business Management unit. He also only has high praise for the University of Pretoria's High Performance Centre (hpc) and TuksSport, led by Toby Sutcliffe, saying that they also played a huge role, not just in terms of his success on the track, but academically as well. He says Deputy Director of TuksSport Steven Ball helped him to get the balance between his athletics and academic programme just right.

Simbine is honest in sharing that his journey to achieving this degree, as with anything worthwhile in life, was challenging. There were times when the thought of quitting did cross his mind, but 'that's not what champions do!' he said. He knew that he was studying for a greater purpose and this is what fuelled him on, teaching him perseverance and in the tough times to be tenacious and not to throw in the towel.

'Make no mistake, it was tough to balance my studies with the rigours of being a professional athlete – this was exacerbated by me competing at the Rio Olympics. However, my support team were amazing and that is why I say that when I stood on that podium and collected my degree, I knew that it was a team effort. All the sacrifice and work was worth it!' 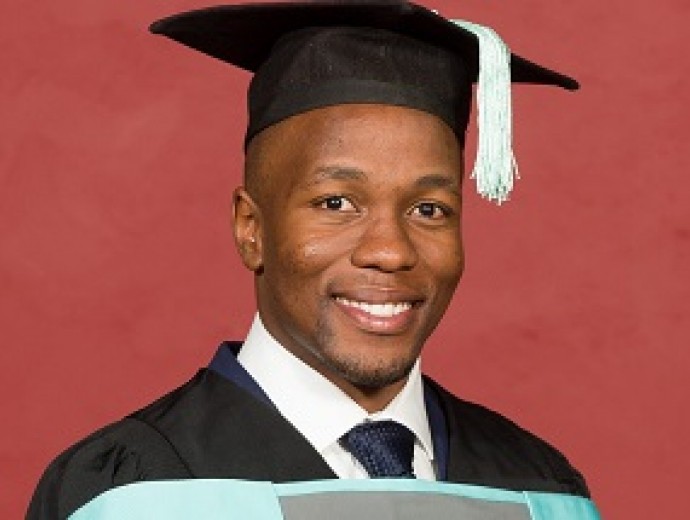