The University of Pretoria (UP) was represented at the recent launch of a major initiative, the International Construction Measurement Standards (ICMS) Coalition.

The coalition represents professionals in more than 140 countries, and was formed when more than 30 professional bodies from around the world met at the International Monetary Fund (IMF) headquarters in Washington, DC.

Prof Tinus Maritz, Head of the Department of Construction Economics at UP, represented the University and the Association of South African Quantity Surveyors (ASAQS) at the IMF meeting. He says that the group aims to create overarching international standards in construction measurement that will align cost, classification and measurement definitions in order to enhance comparability, consistency, statistics and benchmarking of capital projects.

‘In an industry estimated to be worth a staggering $15 trillion by 2025, according to Global Construction Perspectives, inconsistency in something as fundamental as construction measurement and reporting can create uncertainty, misunderstanding and risk. The ICMS Coalition will continue to grow as other professional organisations join the effort to align high-level principles. Industry corporations, contractors and key government stakeholders will also be encouraged to contribute to the new international framework in their capital markets,’ says Prof Maritz.

The IMF meeting was a landmark moment for the construction, project management, cost engineering and quantity surveying sectors. It was the first time that these professions had come together to develop unifying standards that reflect and enhance the increasingly international construction market.

The work to draft and consult on the ICMS will be led by an independent committee of construction experts due to be appointed by the coalition soon. The coalition has stated its ambition to make tangible progress immediately and to deliver an internationally agreed and adopted standard in the near future. 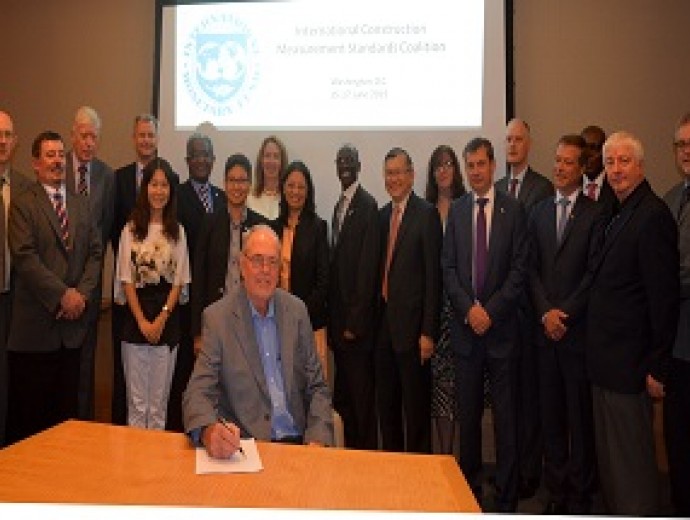 Prof Tinus Maritz, Head of the Department of Construction Economics at UP (front), signed the ICMS Coalition declaration on behalf of the ASAQS at the IMF in Washington.