Chemistry Nobel laureate offers advice to UP academics and students

The University of Pretoria was proud to host 2016 Chemistry Nobel laureate Sir Fraser Stoddart recently, when he spoke at UP’s Future Africa campus. In his lecture, Sir Fraser said that, to be successful as academics, teachers should prioritise their students’ needs and put them ahead of their own. Furthermore, they should support their students through thick and thin.

This public lecture was the second major event to be held at UP’s newly established Future Africa campus, and was hosted by Prof. Vinesh Maharaj, Head of the Department of Chemistry at UP. An entertaining Sir Fraser told academics, students and high school learners that, “Academics should let students take ownership of their research, and they should have the strength of a horse and the hide of an elephant, and the work ethic of a honeybee.”

Knighted in 2007 by Queen Elizabeth II for his contribution to chemistry and molecular nanotechnology, he is in the league of scientists such as Alexander Fleming and Harold W. Kroto, who were knighted for their discoveries of penicillin and fullerenes. “Follow your dreams,” Sir Fraser encouraged students. “Be passionate about something, and do something that you really like. Make your mark on society and tackle a big problem – and don’t be scared to fail.”

Recalling his journey as a scientist, he said progress can be slow and frustrating, and cynics could attempt to derail you. He identified China as a country that is taking the funding of science seriously, and predicts we will see world leaders in science emerging from that country in the future. He does not have much hope at the moment for the promotion of science in western countries. “There is a lack of good leaders who are well informed in science and technology in these countries. In Africa, spirits are being raised among young people. There is a strong enthusiasm for science. If young people are given a step up, we will be amazed at what can happen.”

Sir Fraser was also in South Africa to address a conference of the SA Institute of Chemistry. He is Professor and Head of the Stoddart Mechanostereochemistry Group in the Department of Chemistry at Northwestern University in the United States. This Scottish-born chemist was jointly awarded the Nobel Prize in Chemistry with Jean-Pierre Sauvage  of the University of Strasbourg in France and Bernard L. Feringa of the University of Groningen in the Netherlands, for the design and synthesis of molecular machines. These machines, which convert chemical energy into mechanical forces and movement, have already found use in chemistry as more sophisticated catalysts and in materials science for the production of scratch-resistant polymers.

Sir Fraser also announced in 1991 the synthesis of a molecular shuttle, which is a mechanically interlocked molecule composed of a dumbbell component with two equally probable recognition sites along its axle for a ring component which jumps back and forth between the two sites about 2 000 times a second in acetone solution at room temperature.  The molecular shuttle served as a prototype for the design of a molecular switch and ultimately a molecular pump.

Sir Fraser entertained UP staff, students and school learners with his lecture.

Apart from his introduction of the mechanical bond, which has led to the fabrication of artificial molecular switches and machines, Sir Fraser is also a leader in molecular nanotechnology. His work has implications for information technology and healthcare. PanaceaNano, a company which he formed in 2014 in partnership with Dr Youssry Botros, formerly the Director of Academic Relations at Intel Corp, is producing age-defying cosmetics using nanotechnology, under the brand Noble. 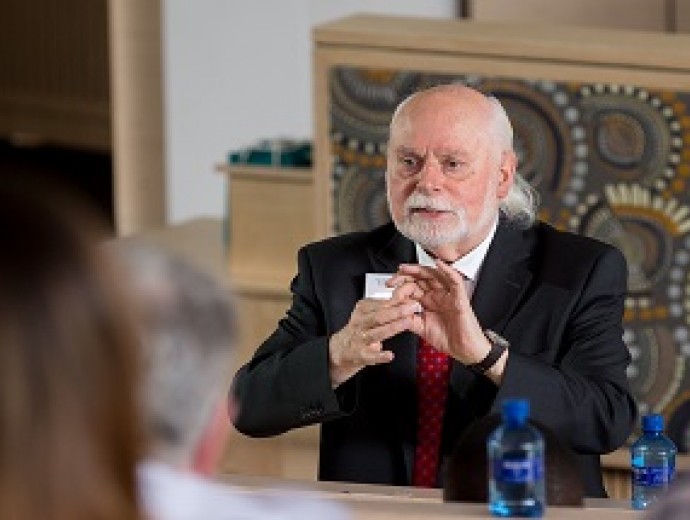