The University of Pretoria (UP) believes that the education it affords its graduates should provide them with the skills, values and attributes that will not only enable them to fulfil their career aspirations, but also contribute to the life chances of others who do not yet have the opportunities they have.

This is was said by UP’s Vice-Principal: Academic, Prof Norman Duncan, at a celebratory luncheon for alumni who were nominees in the Mail & Guardian Top 200 Young People and in the 100 Young Mandelas of the Future Awards. Both these awards recognise the attributes of young people who have displayed outstanding leadership qualities and have much to offer the country in the future.

The luncheon was held at UP’s Gordan Institute of Business Science (GIBS) and was a tribute to these high-achieving young leaders.They were also addressed by Hernan Finkel, UP’s Deputy Director: Relationship and Fundraising; Samantha Castle, the newly appointed Senior Alumni Relations Manager and alumnus, Ernest Mulibana.

Prof Duncan said UP graduates have among others, a sense of autonomy and confidence; leadership; intellectual curiosity; and integrity as well as a collaborative orientation. Furthermore, UP believes its graduates should have the capacity to communicate respectfully; and have an entrepreneurial spirit and a sense of social responsibility. “They should aspire to work for public good, social justice and environmental sustainability. They should advocate equality and fairness wherever they find themselves, both nationally and globally.”

He told alumni that UP was proud of their achievements. The following members of the UP community were among those nominated in The Mail & Guardian Top 200 Young People: Dr Khumalo was nominated in the Science and Technology category.  She graduated from UP this year with a PhD in Veterinary Tropical Diseases and works at the National Institute for Communicable Diseases, as a medical scientist. Involved in genome sequencing, she worked with a team that did research into the listeriosis outbreak. She is also the founder and chairperson of the “I am a future leader Youth Development Programme,” which is involved in youth development in rural areas. She said, “it felt good being nominated.”

For UP alumnus and academic, Dr Dawie Bornman, who was nominated in the Education category, “it’s amazing to be in the top 200. Being younger you don’t get recognised. It is usually the professors who have years of working experience who get recognised. This motivates me to work even harder.” He lectures Business Management and Entrepreneurship in the Faculty of Economics and Management Sciences, and presents entrepreneurship courses through Enterprises UP to people who do not have a school education.

He also runs courses for  school teachers and learners, in the areas of  emotional intelligence and stress management and “loves to see people reach their full potential”. The 100 Young Mandelas of the Future awardees are John Messiahs and Koketso Mbewe.

Mr Messiahs, a first year MBA student at GIBS was nominated for his resilience. He grew up in  Oudtshoorn and was diagnosed with epilepsy at the age of nine and was subsequently bullied. “I was told that there were certain jobs that I could not do like work in a chemical plant and nor could I play contact sport.” He achieved provincial colours in table tennis, squash and badminton. His disabled father passed away when he was 15 and he almost failed his physical science exam in grade 11. He first attained a diploma and then a B Tech degree in Chemical Engineering. He studied part-time while working 12-hour shifts at PetroSA’s refinery in Mossel Bay.

Now with a string of other qualifications, he is a Senior Strategist at the Independent Development Corporation. He said that: “your circumstances only determine where you come from but not where you are heading… Never forget where you come from... As you rise remember to take others with you, because you have never really lived until you have done something for someone who can never repay you.” At just 24, Ms Mbewe, a final year UP chemical engineering student’s achievements read like a book. Recognised for her leadership qualities, she was involved in the Pledge-a Pad Campaign in 2016 that sought donations of sanitary towels for girls. Prior to that she was involved in the Adopt-a-School initiative, where she gave motivational talks at schools. Ms Mbewe also co-founded the Youth Leadership Investment Network, a social entrepreneurial company that aims to achieve paradigm shifts of the minds of young people, through its  empowerment and mentoring programmes.

She is also involved in the UP Business Incubator where she helps source information and funding to help students with their start- up businesses.

She said “studying at UP taught me resilience, and the experiences there have helped build my character … UP has globally recognised standards, and teaches one to be relevant on that level as well. The environment and resources also push you, in some way, to go beyond your boundaries. I couldn’t imagine why anyone would not want to be in an institution that helps them discover themselves in that manner, in addition to their academic programme.”

These enterprising young alumni spent the afternoon at GIBS, networking with each other, some reminiscing about their time as students at UP. 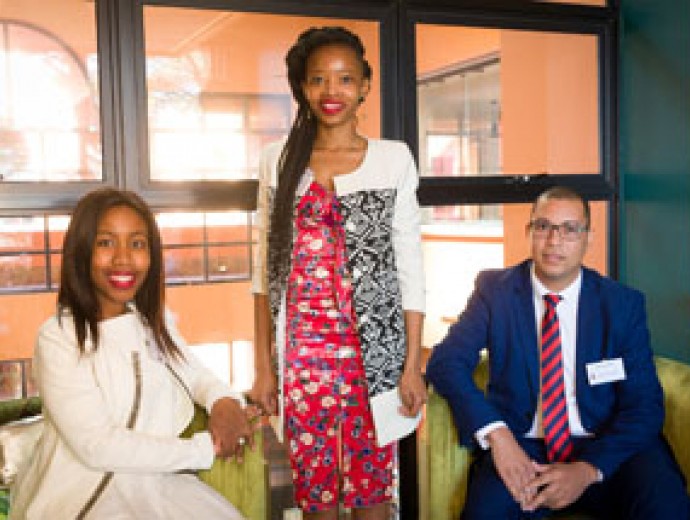