Earlier this year, the Centre for Geoinformation Science (CGIS) at the University of Pretoria (UP) hosted the 2017 Winter School on Participatory Sensing as part of the Geomatics and Participation project between UP and the Karlsruhe University of Applied Sciences (HsKA) in Germany.

The project is funded by the Baden-Württemberg Stiftung under its programme, the Baden-Württemberg-Stipendium for University Students, which aims to bring students from the technology and innovation region of Baden-Württemberg together with students from South Africa to gain experience and knowledge regarding real-time geomatics. An MoU was signed between HsKA and UP in 2016.

The 2017 Winter School was officially opened by Dr Lisette Andreae, Head of Science and Education at the German Embassy in Pretoria, and by Prof Jean Lubuma, Dean of the Faculty of Natural and Agricultural Sciences at UP.

According to Prof Serena Coetzee, Director of the CGIS, 'seven students from HsKA visited UP for the 2017 Winter School, and were joined by seven BScHons (Geoinformatics) students from UP associated with the CGIS. On the first evening, the guests were welcomed to South Africa with beers and burgers at Capital Craft Beer Academy. From the start, the students from the two universities engaged in lively discussions, not only about geoinformatics, but also about their different food and music preferences.'

The Winter School programme introduced the participants to the Alaska informal settlement on the outskirts of Mamelodi and to participatory mobile map applications. A number of presentations provided some theoretical background: Dr Carin Combrinck from the UP Department of Architecture inspired the students about in-situ upgrades of informal settlements and townships; her honours students presented the maps that they use for their urban design projects in Mamelodi; Nina Honiball from the UP Department of Family Medicine shared her experiences about participatory mapping with community health workers in the City of Tshwane; Dr Nerhene Davis from the Department of Geography, Geoinformatics and Meteorology introduced the students to the challenges faced by developing cities; and Derrick Kotze from mLabs guided them on the development of participatory mobile map applications.

Prof Coetzee explained: 'The students developed three mobile apps. With the first app, users can map locations of environmental hazards, such as open wiring; the second app records locations of community gathering points, useful for planning upgrades in a settlement; and the third app, a panic button, tells the community where to respond in case of an emergency. Only open-source software was used: among others, PostgreSQL with PostGIS, Geoserver, Leaflet API and Cordova. The students gained some practical skills that will prepare them for their life as geoinformatics professionals: how to coordinate work in teams, the harsh reality of life in an informal settlement and how geoinformatics applications can help those in need.'

The students had opportunities to socialise with visits to Freedom Park, a game reserve where some of them touched the big cats, and to one of the Park Acoustics concerts. The visitors were treated to a local braai and a potjie, and the locals tasted a home-made Schwarzwälder Kirschtorte (black forest cake) prepared by the German visitors. There was also time for cards, board games and frisbee, or just listening to music and relaxing together. In the blink of an eye, friendships had been forged, two weeks had passed, and it was time to say goodbye.

To see what the participants blogged about the Winter School, visit https://bwsgeomaticsandparticipation.wordpress.com/ 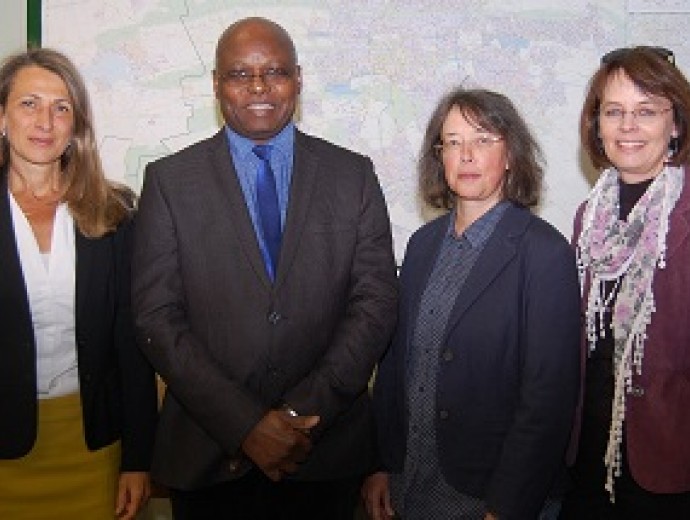