The effects of global warming are being felt around the world – in fact, Africa may be bearing the brunt of climate change. As one of the most religious continents in the world, can churches play a significant role in the fight against climate change, especially in Africa?

This was the focus of a conference recently held by the University of Pretoria’s (UP) Faculty of Theology and Religion to discuss with various religious leaders, theologians and other environmentalist churches’ involvement in ecological sustainability. The conference was unique in bringing together academics, development practitioners and church leaders from different denominational families, particularly including African independent and Pentecostal churches.

The international conference, entitled “Churches in Southern Africa as Civil Society Actors for Ecological Sustainability”, attracted church leaders from Africa and Europe. It was held over four days, mainly at the university’s Hatfield Campus, and organised in partnership with Humboldt University Berlin in Germany and Bread for the World, an NGO run by German Protestant churches. This is the second conference to be arranged by these three partners.

Professor Jerry Pillay, Dean of the Faculty of Theology and Religion, said the conference had been in the making for more than a year. “Our faculty has been working on a research and teaching partnership with Humboldt University’s Research Programme on Religious Communities and Sustainable Development,” he said.

His Grace the Right Reverend Bishop Dr BE Lekganyane of the Zion Christian Church (ZCC) delivered the keynote address, in which he talked about how the ZCC tackles ecological sustainability in its practices.

“Because of the legacy of apartheid, African independent churches existed outside of mainstream Christianity,” Prof Pillay said. “Now they can come forward to share their ideas.”

Dr Coenie Burger, a former moderator of the Dutch Reformed Church, responded to the Bishop’s lecture, thanking him for his commitment to peace, respect, education, development and the preservation of the environment.

Africa is one of the most religious continents in the world, said Dr Tanya van Wyk, a senior lecturer in the Faculty who was instrumental in organising both the public lecture and the conference.

“As a faculty of theology and religion, it’s important to acknowledge the power of religion. Because religion is so important in Africa, it’s a way of seeing and breathing. The only way then to really tackle any type of problem would be to incorporate religion, because that’s a way to capture a lot more people. It’s the way they understand reality and make connections.”

She explained that with the continent feeling the effects of global warming more intensely, it is important for the church to think of the role it can play in the fight against climate change.

The conference forms a major part of the initiatives of the Religious Communities and Sustainable Development programme at Humboldt University in Berlin, and its head, Philipp Öhlmann, emphasised the challenges of climate change for Africa. “There are clear signs of an increasing interest in ecological sustainability and climate change among Pentecostal and independent church leaders across Sub-Saharan Africa. This conference is highly relevant in providing a forum for church leaders, academics and development practitioners to jointly embark on deep engagement with issues of ecological sustainability. Regardless of doctrinal, theological and liturgical differences, climate change and ecological sustainability call for united and common engagement. We are all pushing into the same direction.”

Reverend Thomas Stephan, a representative of Bread for the World, offered a sobering perspective on climate change as it relates to Africa. “One of the biggest duties we have is not only to implement the projects on food security and health that we are funding, but also to do the advocacy at home,” he said. “Germany is believed to produce 2% of the carbon emissions of the world and Africa as a whole is responsible for 2.6% of the emissions. That means a tiny country like Germany is not part of the problem but one of the main causes of the problem, and Africa is suffering as a result.”

Ultimately, Dr Van Wyk said, the aim of the conference was to come up with guidelines to assist other religious bodies to mobilise more people.

“The main outcome of the conference would be something like a manual or an app that can go to religious groupings that weren’t at the conference,” she said. “It’s not only about publishing academic papers, which will happen, but about giving people strategies. People who are doing wonderful things have throughout the conference presented what’s already happening. This is part of why this conference is so new and innovative.” 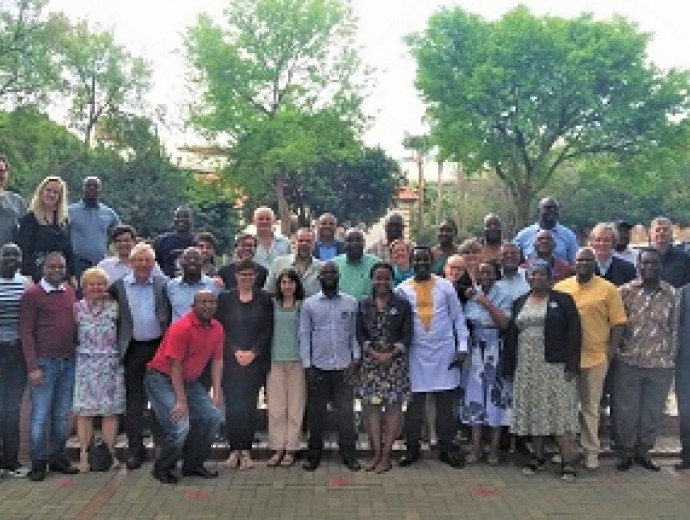 A group photo of the conference participants