Meditari Accountancy Research is a highly ranked international accounting research journal. However, the journal has deep University of Pretoria (UP), and therefore, South African roots. Prof Quintus Vorster, then Head of the Department of Accounting, was the main driving force behind the creation of the journal, which published its first issue in 1993.

Apart from the more noble motivations behind its establishment, it was becoming too difficult for many accounting academics to publish in the main South African refereed journal of the time, De Ratione, which is now known by the name South African Journal of Accounting Research. Taking its lead from the incumbent journal, it was taken for granted that a serious academic journal had to have a Latin name, explaining the name Meditari, which means pondering. However, after a few years, it became apparent that many thought this must be a medical journal, based on the first four letters of the name.

In those early years, it was most important for a South African academic journal to be accredited by, or on the list of, the South African Department of Higher Education and Training (DHET). If it wasn’t, no-one would see the pay-off of publishing in the journal and no-one would bother submitting articles. Meditari and the ISBN number associated with that name was on the list since 1994, based on that first 1993 issue, which featured five articles. Changing the name would require getting a new ISBN number, and during the late 1990s, the DHET had frozen the journal list, so a name change would involve losing accreditation. Meditari was stuck with its name. However, as editor of the journal at the time, I came up with the plan of adding “accountancy research” as a sort of pay-off line and just ‘informally’ calling the journal Meditari Accountancy Research, even though the official and accredited name was still “Meditari”.

Around the year 2000, UP started to involve other universities in editing the journal, which was also meant to ensure greater buy-in and contributions from authors at these other universities. It worked and the journal grew, but there came a time when the editors felt the need for the journal to align more strongly with what was seen as good practice in the international accounting research community. One of the first steps was to require stricter review reports and more extensive revisions. Authors who had been used to being required to do relatively minor revisions and in some cases being able to bluster their way past previous editors were outraged. They largely abandoned the journal in favour of their own new journals they had managed to get onto the DHET list. This was a difficult time for the journal and internationalisation was seen as the only way forward. Emerald was approached to publish the journal to assist with this process (the journal had been published in-house by UP before).

Around this time, in 2012, I agreed to edit the journal, because I had published in the journal and wanted the journal to continue on a sustainable footing. I thought we just needed to get the journal’s ABDC (Australian Business Deans Council) ranking from a C to a B. Thereafter, Australians and New Zealanders would support the journal and I could pass the editing role on to someone else. Well, the ABDC re-ranking exercise in 2013 was always going to be too soon, so Meditari Accountancy Research was ranked a C until the next ABDC journal assessment in 2019, and I felt I had to stay on as editor until the journal got a ranking that reflected the good work that was being done by authors, reviewers, associate editors, the editorial board, and everyone else in the journal’s wider community.

Internationalising the journal involved inviting international colleagues to submit their papers to the journal, appointing them on the editorial board and asking them to review papers. Of course, this had to be done while keeping good relations going with the South African accounting research community, who was more familiar with the journal and saw it as their own. A fine balancing act was required, because it is very difficult to maintain a system where the effort required (to get a paper into the journal) is greater than the reward (in this case getting credit for publishing in a lower ranked journal).

As part of the ‘marketing exercise’, I started the journal’s conferences, with the first one taking place in South Africa in 2014. The conferences had the aims of marketing the journal, making publication in the journal accessible through the feedback process of papers at the conference, and of building the research culture and research skills among South African accounting academics by exposing them to good academic conference practice and the excellent international plenary speakers we invited. Since the SAAA only organised a biennial conference, Meditari took the same time slot every other year, basically a marketing ploy, designed to make it appear as if the Meditari Accountancy Research Conference could stand beside the SAAA Conference. In the end, it could, only because it did. So we had the conference in South Africa every second year and then elsewhere in the world every other year (Bologna, Italy, 2015; Japan, 2017; Korea, 2019; Verona, Italy, 2021, restrictions permitting).

The journal is since 2020 ranked A by the ABDC, which is the second highest ranking. It is also ranked 13th out of the 165 accounting journals on Scopus, according to their CiteScore ranking; and 19th accounting and tax journal, according to Google Scholar metrics. Overall, the journal is now well respected. One of the indications is that one of the top accounting journals, Accounting, Auditing & Accountability Journal, is the journal with the most citations to Meditari Accountancy Research articles. So articles published in the journal is not only getting many citations, as is reflected in the overall citation statistics mentioned, but these citations are also made in articles published in the top journals.

We can all be proud of a journal that was started by a visionary UP academic, which is now a top international journal, thanks to the hard work and support of so many colleagues at UP, from other South African universities, and further afield. 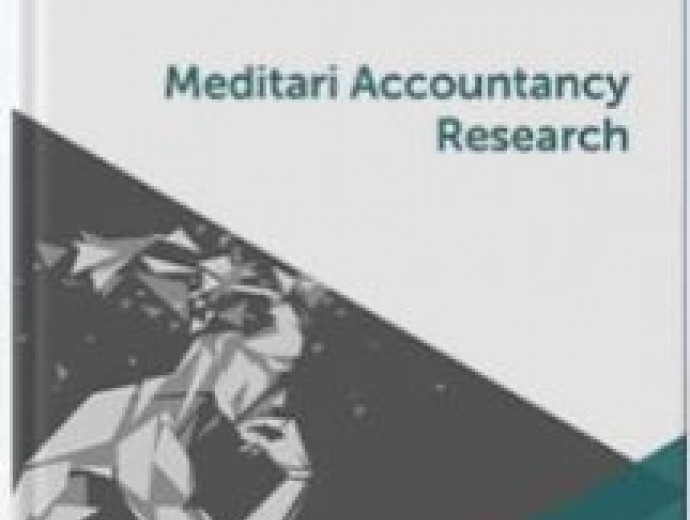